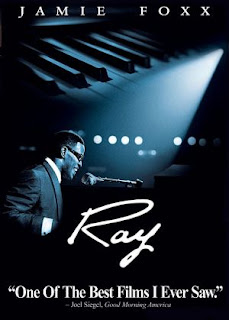 Ray Charles Robinson (1'930-2004) was born in Florida in a poor family. His brother drowned in a bath tub, he became blind at the age of 7, while his mother inspired him to remain independent. As an adult, he takes a bus to Seattle where he got a job at a night club, and astounds everyone with his talent for playing a piano. He tours across the US, but then quits the group and gets hired in New York by Atlantic Records. He brings out a few hit albums and marries Della Bea with whom he gets a child, but can't quit meeting with other women. After his drug problem gets serious, he goes to an rehabilitation clinic.

"Ray" is a standard, but effective, energetic and honest biographical film that puts the spotlight on a fascinating figure, the legendary musician Ray Charles, and doesn't avoid to present both his positive and negative sides. Director Taylor Hackford overstuffed the film by trying to cram as much details from Charles' life as possible, even adding some banal scenes of him sensing water where there is none in order to symbolically speak out about his guilt of his drowned brother, yet the chaotic structure was brought in a rather proper row, with nuances and details giving it a better algebraic sign. The tragic life of a man who became blind as a child and went all by himself to a bus to Seattle, a town where he was never in, is interesting enough, as well as some dignified monologues, like when Della Bea tells him: "I can't pity someone I admire". Jamie Foxx's performance has been hyped so much that some viewers probably expected him to change the world, but leaving the complaint aside that it's just another example of an "actor who just happens to look like an eccentric celebrity and imitates his/hers mannerisms", his acting, style, energy, grace and accent were indeed excellent, thus this top-notch role will probably stay one the greatest things he ever did.