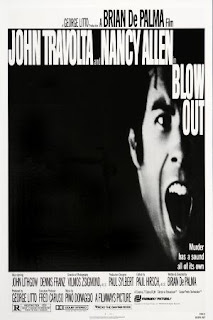 Jack is a sound editor and technician for movies. His newest assignment is to record a convincing sound for a scream for some horror movie. While he was recording sounds at night in a park, he accidentally spots a car that falls into the river. Jack jumps into the water and manages to save the girl inside, Sally, a prostitute, but not the driver. When the police arrive, he realizes that the deceased is senator McRyan, and thus gets instructions to not go public about it. But on his tape, that recorded the sound of the accident, he hears a gun shot, quickly unraveling a conspiracy revolving around the assassination of the senator, who wanted to become president. Their killer kills Sally, but Jack kills him.

On the Charlie Rose show, Tarantino mentioned his 3 favorite films. Those were: "Rio Bravo", "Taxi Driver" and "Blow Out". In "Blow Out", director Brian De Palma made a homage to Antonioni's famous film "Blow-Up" and even achieved a better result than the original, but in the end Tarantino still exaggerated a little bit in it's reputation. De Palma's strong and absorbing style affirmed a bunch of genius scenes (the almost 5 minute long opening take, where the camera takes the point-of-view of the killer walking through a student campus, turns it to be just a trashy horror movie the hero, Jack, is observing) and visual innovations (split screen) that make the story intriguing, John Travolta is very good in the leading role, whereas the long sequence where he plays his tape of the car accident forwards and backwards numerous times in order to exactly find out and mark the frame where the shot was fired, is one of the most passionate examples of pure cinema energy. Still, the flaws ruined a potentially perfect result, and among them are illogical moments, Nancy Allen's irritating accent and banal ending.