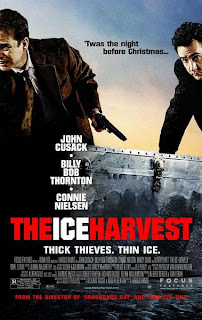 Wichita on Christmas Eve. Lawyer Charlie and his friend Vic have just stolen 2 million $ from a local mobster and plan to leave the city at midnight. Charlie spends the night visiting a local strip club, taking care of a drunk friend, Pete, and visiting his ex-wife and his kids who hate him. The plan goes wrong when an assassin goes on to search for the money: Charlie and Vic put him in a trunk and throw him down the freezing water. Charlie also lets Vic drown because he suspects he could have killed him. He saves Renata and kills another assassin. He then figures she has the money and had plans to eliminate him in the first place, and thus kills her.

After his critically acclaimed "Groundhog Day", director Harold Ramis somehow simply never reached it's level, and thus his black crime comedy "The Ice Harvest" is just a solid achievement, though it gets a lot better in the suspenseful and clever finale. Rarely has cinema produced such a perverted "Christmas film" like this one: even though it plays out on Christmas Eve, the characters swear, kill, go to strip clubs, steal and insult their families, which makes it painfully grotesque and morbid at moments, falling deeply into the black hole of dark grey films without hope, which ended wrong more often than it did right. John Cusack is once again excellent and the crystal clear cinematography is amazing, creating an opulent noir mood, yet the chaotic elements are not placed in harmony, but in disproportion, while the plot that could have ridiculed greed, lies, consumption and corruption of people during holidays ended up falling flat on it's face. If anything, except for the brilliantly funny small scene where Vic (Thornton) shoots a mobster coming out of the trunk - who just remains standing - and adds: "There. So now you're dead, and don't go pretending you're not!", there is one moment of inspirational writing that clearly shines in the whole film, in the long monologue where the protagonist Charlie gives a long speech about how his by-the-book-guy father had an identical twin who was the complete opposite, a wild guy who gambled all his life, and they all died with 54: "it is futile to regret. You do one thing, you do another... I mean, so what? What's the difference? Same result".