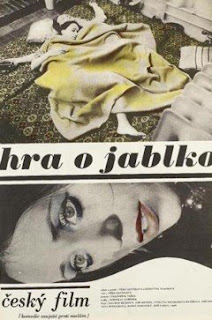 Young Anna finds a job in a maternity hospital. She is a pretty clumsy nurse who can't even correctly connect the machines to the electricity, but one day she helps a woman deliver a baby. Anna falls in love with the Doctor John and starts a relationship with him, but he is rather cold towards her and cheats on her with a woman married to his colleague. When Anna becomes pregnant John finally starts to love her, but she leaves him.

After her probably most significant films, satire "Daisies" and drama "Fruit of Paradise", Czech director Vera Chytilova was forced to a 7 year pause by the pseudo-Communists, but she returned with this comedy entitled "The Apple Game". The exposition is typically avantgarde and grotesque for Chytilova: the camera records the branches of trees in wide angle lens, distorting them to look almost surreal. A music is heard in the background that suddenly stops, but the musician-narrator is heard saying: "Oh, on which page am I...Oh, yes" and then it starts playing again. In the maternity hospital the camera directly shoots a woman giving birth to a child, while milk is dripping from a mother's nipple: all pretty extreme and radical, but the story then quickly turns for 180 degrees and becomes very calm, gentle, touching, sweet and feminine. The main character of the clumsy nurse Anna (excellent Dagmar Blahova) who falls in love with the doctor John (Jiri Menzel, the famous Czech director) is opulent. The film is filled with neat moments: for instance, when John gets drunk and falls asleep in a bar, she drags him to a taxi and brings him to her bedroom - thus he is surprised when he wakes up in the morning in his underwear. In the other, Anna takes her clothes off in a meadow and remains topless, causing a slight surprise to John ("Aren't you ashamed?" - "But there is nobody here." - "And me?" - "You're a doctor!") and warming her bare breasts over the fire. The film is flawed, but very fun, irresistible and "Czech".