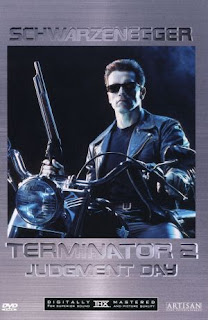 A decade after the last events, two Terminators are once again sent from the future to the present L.A. - the first Terminator is a good one, programmed to protect the kid John Connor who will become a rebel leader of people fighting intelligent machines. The second one, T-1000, a liquid metal prototype that can transform into any person, is programmed to kill Connor. John finds out the Terminator obeys his every command and uses him to save his mother Sarah from a mental asylum. She decides to kill the creator of the advanced doomsday computer, Dyson, but changes his mind and goes on to destroy his firm Skynet. T-1000 finds them, but the Terminator destroys him by throwing him into molten metal.

7 years after the first "Terminator", director James Cameron made a "polished", but also an excellent sequel and turned it more towards the Hollywood mainstream, placing a more optimistic message, reducing the story to a simpler action spectacle and changing Arnold Schwarzenegger's title character from a bad guy to a good guy, a hero, dropping most of the gritty and existential elements from the first film. It is a very straight forward story, with only minimal plot holes - for instance, why didn't T-1000 simply go back in time and eliminate Sarah's parents? - and slightly exaggerated "cool" cliches and occasionally convulsive writing - the scene with the two guys showing up after they heard John shouting for help, but then he orders the Terminator to beat them up - while Linda Hamilton's character Sarah has been slightly degraded to an annoying, demented psychopath.

Still, the 100 million $ budget is more than visible and Cameron rises to the occasion in using it to the fullest, creating a 'tour-de-force' spectacle, so suspenseful, fluent and dynamic that one hardly has the time to notice any (minor) flaws, and without doubt all the action sequences were virtuoso choreographed, planned and executed. The dream sequence where a nuclear bomb wipes out L.A. is one of the rare examples where special effects and author's vision came to a perfect match, while one scene is already an action classic: after the truck crashes and spills its content, liquid Nitrogen, the "chameleon" robot T-1000 starts walking very slowly, freezing more and more, until it stops and becomes petrified. And the Terminator just takes a small pistol, says: "Hasta la vista, Baby!" and shoots him, causing his whole frozen body to fall apart: that scene is a real bravura moment. "Terminator 2" is a rare feat of a sequel that is even better than the original, a movie that was improved not only technically, but also creatively.