I Have Two Mothers and Two Fathers 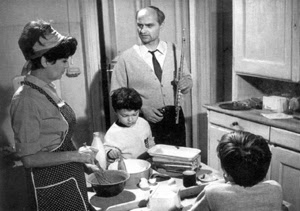 Little boy Đuro and his much older brother Zoran, who is already a young lad, don't live together anymore. Their parents divorced and thus Zoran now lives with his dad - who got married to a beauty with a baby - while Đuro stayed with their mom - who got married to a poor musician who has a son, Draško. Hence, they have, in a way, 2 mothers and 2 fathers. Đuro often goes to visit his dad, but is angry that Zoran is acting rudely towards their mom and ignores the musician. When Zoran becomes obsessed with his dashing stepmother, his dad warns him, moving him to his mother's apartment, while Đuro goes to live with them.

This melodramatic comedy suffers a little bit from overstuffed dialogues and static charge, but in the end it's still excellent. Shot from the perspective of the little boy Đuro, who ironically says he has two mothers and two fathers (mom, dad, stepmother, stepfather), the story conquers with it's sympathy and simple calligraphy of talented director Krešo Golik manifested in dialogues ("Why don't you have a hair cut? You look like a savage!" - "Even savages are people!"), observations (in the Zoo, the kid asks his dad why those birds (vultures) don't sing, and he explains that they don't sing, but hunt) and interesting events (Đuro is taking a bath in his underpants in front of his mother). Even though the sweet mood suggests that the film is only an acronym of it's potentials and not meant for older audience, Golik with ease manages to insert even sharp observations (teenager Zoran fell in love with his stepmother) and bitterness, while Mia Oremovic delivered a great role as the mother.