The Chronicles of Narnia: The Lion, the Witch and the Wardrobe 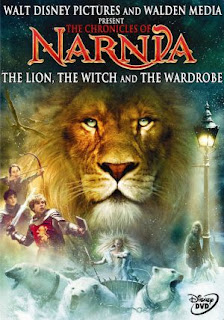 Britain during World War II. Two sisters, Susan and Lucy, and their two brothers, Peter and Edmund, get sent to live in an isolated mansion at an eccentric professor in nature, far away from the center of the war. Once they arrive their with the train, they settle down, but discover a secret passage in a wardrobe that leads to the magical country Narnia, cowered by snow caused by the evil White Witch. Although the kids join the good army of the Lion Aslan, Edmund gets enchanted by the beauty of the Witch. Still, he shows remorse and joins the good army, that defeats the Witch. Then they return home.

Movie fantasy "The Chronicles of Narnia", the adaptation of the book with the same title by C. S. Lewis, is a moderately successful and appropriately fairy tallish achievement that is much more balanced in mixing horror and kids elements than the amorphous "Harry Potter" series. Cult independent actress Tilda Swinton is brilliant as the seductive, squeamish and miscreant White Witch who attracts Edmund to the evil side with her beauty and charisma (which some viewers and readers of the book have interpreted as a symbolic Biblical parallel of a person who shows remorse and returns back to the good side) while some situations are funny, like when the Beaver tells the kids the legend of Aslan and Susan adds that his words don't rhyme, but all of the glamour and glorious costumes didn't cower up the fact that director Andrew Adamson's capabilities are in this case pretty standard. All in all, the movie could have been better, especially if they threw away those annoying cliche "in your face moments", but a small scene towards the finale, where the 4 main protagonists grow up into adults in Narnia and then accidentally find the passage back to Britain where they once again become kids, is truly magical.

I have never read the books, but it left me with the same exact feeling as yourself: it could had been a lot better.

The sequel looks a lot better