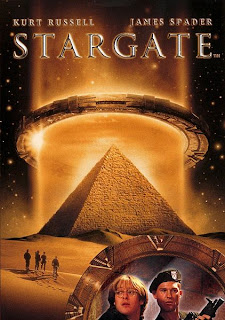 Archaeologists discover a mysterious, giant stone ring in Egypt. Decades later, Egyptologist Daniel is offered to translate the hieroglyphs of the ring, helf in an Air Force installation. He manages to translate it and soon discovers the rings is actually a Stargate to another planet, which would prove that the pyramids were built by aliens. When the crew opens the portal, Daniel, Colonel Jack and a few other soldiers enter it and come to a desert planet. They meet a bunch of nomad people who worship them because they wear a Ra amulet. They quickly meet the real Ra, an alien dictator who took a form of a boy to prolong his life. Together with the people, the start an uprising and kill Ra and his spaceships. Daniel stays on the planet, while the soldiers return.

It's nice to find a big budget Hollywood film that tackles the subject of the paleocontact thesis of Erich von Däniken and gives a run for the money to all those who are not satisfied with the theories that the pyramids were built by people, even if the final result is rather mild and mainstream. The first third of the film is really fantastic, tickling the imagination of the viewers by showing how a mysterious stone ring was found in Egypt, which turns out to be a Stargate to another planet. When the protagonists enter the portal and arrive at an unknown desert planet, the story just picks up even more steam, but it quickly sizzles off into the typical mainstream standard in which the concept wasn't exploited enough - at times it seems Roland Emmerich and his partner Dean Devlin didn't know what to do with the story - while the dry finale turns into a cheap action spectacle. Still, the desert landscapes are great, Jaye Davidson is fantastic as the alien dictator Ra, the Cinematography by Karl Walter Lindenlaub is crystal clear and some attempts at thought provoking elements are neat, even though the story rarely grows out to be anything more than a light philosophical entertainment.