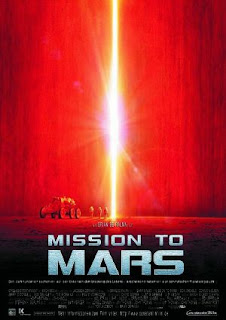 A farewell party is underway for 4 astronauts who are about to go to Mars. But once there, they get swallowed by a sand storm. Months later a new space crew is sent to a rescuing mission, but once in the planet's orbit they start loosing their oxygen supply due to a malfunction on the spaceship. Commander Woody tries to fix it and catch the resupply module, but gets lost in space and commits suicide by taking his helmet off. With a capsule, co-Commander Jim and his crew manage to land on Mars and discover that astronaut Luke survived. They get to the giant Cydonia Mensae "Face" and meet a mute alien Martian who shows them a screening of how life on Earth came from Mars. Jim leaves with his spaceship into outer space.

After "Mission: Impossible", Brian De Palma once again eagerly strived for a new mission and thus directed "Mission to Mars", a "Hollywood assignment" he didn't want to make, yet even though most of the critics bashed it - it's average grade on Rotten-tomatoes.com is only 4.1 out of 10 - it's a surprisingly well made, quality film. Already the 3 minute long opening take is impressive, as well as some humorous dialogues (someone says to the astronauts: "When you land on Mars, we will finally be able to tell that there is no intelligent life there!"), the patient, old fashioned narration in space is impressive while the sequence where astronauts Woody and Terri dance in Zero-gravity in tune to the song "Dance the Night Away" is pure genius. This is a big budget film, but it's always refreshing to see an independent director like De Palma in such a imaginative genre, who crafted some really well made moments, while Tim Robbins once again delivered a great role. Still, the film's biggest flaw is it's uneven, impartial, sometimes even trashy screenplay that has a few fundamental problems: for instance, there's a big contradiction between the Martian aggression at the start and pacifism at the end: in the exposition, the Martian security system kills three astronauts that came close to the "Face", yet in the end, when the new astronauts enter it, the alien ends up completely harmless and can't wait to explain them some big secrets! Also, Gary Sinise's character is rather one dimensional, but as a whole this mission was really well executed.

Hello, Marin!
Thanks for your posting and have a good weekend.