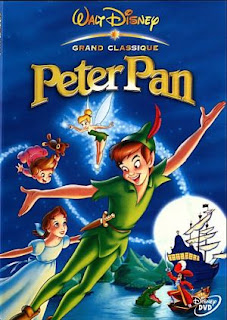 London. Wendy is a teenage girl who lives with her parents and little brothers Michael and John. One night, when their parents go out, a flying boy named Peter Pan shows up together with his fairy Tinker Bell, and they enter the house through the open window. He gives the kids the ability of flying and brings them to Neverland. There the evil Captain Hook and his pirates are constantly planing to eliminate Pan. Michael and John join the Pan's kids group and meet the Indians. But Hook captures the kids and plants Pan a bomb. Pan survives and defeats Hook in a duel who runs away, while the kids get safely returned to London.

During its premiere, "Peter Pan" did not achieve a greater success at the box office, but with time it still deservedly became an animated classic. The first third of the film is still the best, filled with magic and neat ideas, and even placed the irresistibly charming character of the little fairy Tinker Bell in the foreground, who was so popular that she even became a trademark for Walt Disney animation. The ideas and scenes are ravishing, like the one where she observes her butt in the mirror or when due to her extreme jealousy towards Wendy she changes her color from yellow to red. The second and the last third are slightly uneven, or better said not as harmonious as the first one, while the authors "deliberately overlooked" a few exaggerated, grotesque moments, like the incorrect gags revolving around Hook's panic fear of the crocodile, while the movie lacks some ontological scene, but the songs and the animation are marvelous, thus as a whole this is still an excellent film, ironically better than Disney's "Aladdin" that had an ontological scene of Yasmin and the hero flying on a carpet through the landscape, but didn't contain such a well thought out structure.