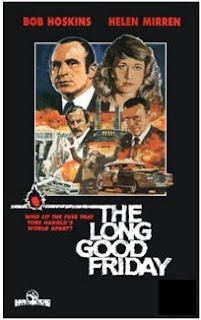 London. Gangster Harold Shand controls a criminal empire built on every vice. For his next racket, he plans to buy up London dock yards and redevelop them for the '88 Olympics. Yet on Good Friday when Harold meets with an American Mafia chief Charlie to seal their financial partnership, somebody kills two of his right-hand men, Colin and Eric, attempts to murder his mother and blows up his favorite pub. His girlfriend Victoria tries to keep Charlie calm while Harold violently questions every gang in town, but doesn't find out nothing. Later on, he discovers his assistant Jeff sent Colin to a failed money deal with IRA, and kills him. He then kills the IRA member but Charlie notifies him that he doesn't feel safe investing. When Harold enters his limousine, two men kidnap him.

This masterful cult crime film neatly stayed faithful to the classic, old school Cagney gangster films from the 30s and 40s, only minimally modifying their formula for the 1980s, becoming influential and very realistic without exaggerated violence, music spot style or "in your face" moments. Calm and measured, John Mackenzie's direction at first encircles how gangster boss Harold investigates in order to find out who his "invisible enemy" who is bombing all his favorite places really is, crafting a few amazing moments that get under your skin: for instance, he and his men visit an informer and question him if he knows anything about Eric. "What's wrong with Eric?" he asks. "Well, let me put it this way - except that his brains are 50 yards away from his ass, he is all fine!", responds Harold. The neat scene where the camera looks outside the pub's window and spots Harold's limousine approaching, then cutting right to the driver's perspective inside it when an explosion destroys the pub, is effective, while the sequence where Harold's men let the suspicious gangsters hang upside down in the freezer like meat should be considered a classic. It's true that some nostalgic viewers over hype the film and make it sound "more dangerous" than it is, while the "open ending" isn't as great or as mysterious as its reputation, yet it still hits the right note despite a few flaws and the esoteric score is fantastic. Actor Bob Hoskins was nominated for a BAFTA.