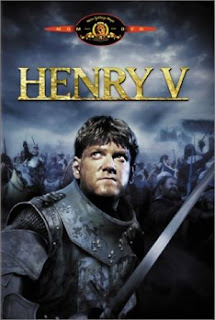 The young Henry V (1387-1422) becomes the king of England and raises the church tax, infuriating the Canterbury. He persuade Henry to attack the French territory and finish the long war against the king Charles V, whose son decided not to pay a big amount of money, jokingly sending balls to Henry. Henry removes the three counts who betrayed and cheated him and goes to fight the French. He conquers an important fortress, but Charles V threatens to kill him if he continues. The following day a big battle starts, but even though there are 5 times more French soldiers than the English, Henry still manages to win, thus Charles V gives him the crown and Catherine for his wife.

"Henry V" affirmed director Kenneth Branagh as a big admirer of William Shakespeare whose plays he will continue to adapt to the big screen ("Hamlet", "Much Ado About Nothing"). "Henry V" is considered to be Branagh's best film because it has a lot of qualities: instead of paying the taxes, the French heir jokingly sends the English king some tennis balls, making him comment that "thousands will weep more than laugh at that joke". A vertiginous friend recommends him: "When you become a king, don't hang thieves!", while the story is told by a narrator from the 20th Century in a modern coat who walks by the protagonists. Still, Branagh doesn't know how to intrigue - when he leads his monologues that last up to 5 minutes or theatrical lines, it's inevitable that boredom appears and the concentration of the viewer falls. Branagh was nominated for an Oscar for best actor and director, while the costume design won the award, and a BAFTA was awarded to Branagh as best director.