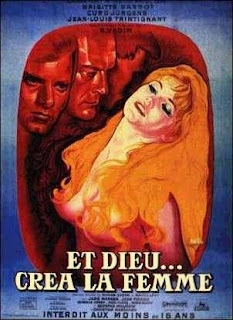 St. Tropez. The teenage Juliette seems to be the most desired woman in town, and she loves her status since her hormons are going wild. She flirts with Antoine Tardieu in the dance hall, but when she hears that he just wants to use her, she breaks up with him. Her foster parents have enough of her desire and threaten to send her back to the orphanage. In order to keep her in town, Antoine's younger brother Michel spontaneously proposes her and she agrees to marry him. But she can't settle down and is admired by other men, like the middle-aged, wealthy Eric, who persuades her to talk the Tardieu into selling him his land. When Antoine sleeps with her, Michel decides to shoot her, but Eric stops him. Michel and Juliette reconcile.

This famous cult movie, once considered an erotic drama, but for today's standards it's so tame that it can be now categorized only as a drama, is an interesting achievement, but obviously just a vehicle to launch Brigitte Bardot into stardom. Bardot is really attractive, even today, but except for her body, there is little else to admire in this film, a boring, sleepy and at moments heavily overstretched melodramatic soap opera that was directed in a pretty standard, dated way. From today's perspective, it seems slightly amusing that the film caused such "controversies" by the Catholic League of Decency, since even it's most daring shots, like the beginning where Bardot is lying naked on the ground, sunbathing, or timidly taking her clothes off to sleep with her new husband, the young and insecure Michel, all seem too shy to stir up some "rules of good behavior", as if intercourse is worse than murder or greed. But, leaving all that aside, it's a pretty weak and underdeveloped film, whose charms have long gone with the passage of the 50s. If anything, the best part in it is the concept of a sweet teenage girl who wants to enjoy in her desire, but is prevented by moral hypocrisy of a jealous society.