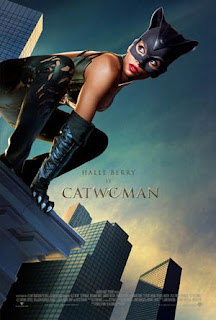 Patience Phillips is a shy woman working a horribly boring job of design in a cosmetics company run by George and Laurel Hedare. One day, while trying to save a cat, she gets stuck on a ledge outside her window, but is saved by detective Lone, who invites her out to coffee. But when she accidentally hears a top secret report about the dangers of a new skin product, beau-line, the crew members decide to shut her up and kill her. But the cat she tried to save, a magic cat from Egypt, brings her back to life and she gets special abilities by a cat. She tries to stop beau-line, but Laurel kill George and frames Catwoman for the crime. Catwoman is arrested, but manages to escape and kill Laurel.

Damn those music spot editing techniques, cliches, pseudo cool dialogues, exaggerating ideas, grey mood, "in your face moments", sloppy writing and ludicrous directing that ruined this superhero film that could have actually been all right otherwise. Admitted, all those annoying ingredients can be also found in numerous other modern big budget films that were actually acclaimed and pretend to be ambitious, so that "Catwoman" at least has the decency to admit it's nothing more than a silly failure. The film has only two virtues: talented Halle Berry is once again charming in the leading role and at moments it's hard to not sympathize with her, from the good parts where she plays the shy Patience up to the bad moments where it's embarrassing to play Catwoman in that silly "cat" attitude, and here and there Alex Borstein manages to steal the show as her amusing friend Sally. Everything else is regrettable. The situations and ideas are so over-the-top that they become unintentionally comical, like the sequence where Patience plays basketball with Lone, jumping up on down on the wall while the kids are watching, and then slam dunks the ball falling "seductively" right on top of him: every second and every frame of that sequence are so poorly crafted that the authors decided to make probably 100 cuts in just one minute, since every other frame pushes out the last one and tries to forget it's faults. The finale is stupid, the dialogues are silly (Catwoman and Lone are on the ground while a loose electric cable is hanging besides them. Lone says: "Watch out, we might get grilled", upon which she says: "I always knew there was a spark between us.") and the execution is lame and can't be saved even by the solid normal scenes, resulting in a film made for the MySpace generation.