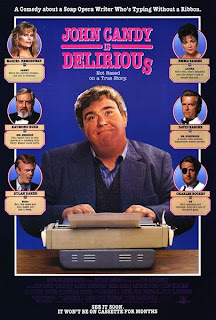 Jack Gable is already 5 years the author of the popular TV soap opera "Beyond Our Dreams". While going out with the star of the show, Laura, who plays Rachel, and in whom he is secretly in love with, he bumps himself in a car and falls unconscious, waking up - in his own show. All of his fictional characters are there and immediately the evil dynasty regards him as the enemy Jack Gates. But there is also another specificity - his typewriting machine that makes everything that is written really happen in the show. Thus Jack writes himself in the role of the hero, a skilled dancer and charming personality, but starts to hate his love Rachel due to her rotten nature. Then the real Gates shows up and shoots him. Jack wakes up - it was all a dream. He meets Janet from the show and they fall in love.

Legendary comedian John Candy often appeared in films that were "too narrow" to really bring out the best of his talent, but he also starred in a few interesting films, among them in "Delirious", whose twisted story has been described by Tom Mankiewicz as a "Walter Mitty fairy tale set in the 90s", though today it can be interpreted as Candy's forerunner to "Groundhog Day". Honestly speaking, this comedy has a hero with more self-awareness than "The Truman Show" or "Pleasantville" filmed 7 years later, but is on a bad reputation due to insufficiently exploited story and several banal moments. There is some magic in the idea that the hero Jack (Candy) finds himself in the world of his own TV soap opera and writes his own destiny by turning into a skillful dancer, musician and respected person, whereas some little scenes have small crumbs of inspiration, such as when Jack conveniently gets rid of all the characters to take Rachel out for a drive, with a deliciously ironical, typical lack of sense for a soap opera ("I have to check the balance on my tires", says Blake. "Why now?", asks his father. "I don't know!", he replies) or when Jack gets so used to every scene playing out according to his script that he says this demented line when the phone suddenly rings in his room: "What is this? I didn't write this!" Still, for such a concept, the film is never as funny or as imaginative as it could have been, but somehow too mild: disregarding the fact that we don't ever see the viewers of the show, since it is not important anyway, the events are too goofy, discordant, erratic (especially lame when a bartender brings in a deer due to Jack's typo instead of "beer") and at times too 'rough' for an elevated comedy (especially the mean-spirited running gag of one side character experiencing side effects of medication, such as hair loss or endless thirst), and since the hero had the power to do virtually everything, he could have changed the Universe, and not just some small examples of triviality. There was more food for thought and philosophy here - but at least it scratched the surface, which is already something.