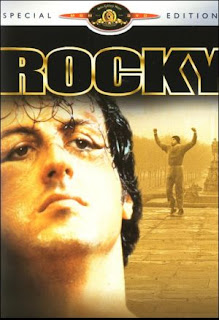 Rocky, an Italian boxer, never achieved a great success in his career, even though he is very strong. He earns his money as a debt collector and falls in love with a very shy and clumsy pet store clerk Adrian. But Rocky's life will change when he is accidentally selected to fight the heavyweight champion Apollo Creed. After a long training overlooked by his old mentor, Rocky loses the match but ends up with Adrian.

Interesting and uplifting "underdog" boxer drama "Rocky" was once very popular, but today it's slightly dated, wherein it didn't even help the 3 won Oscars (best motion picture, director, editing) and one Golden Globe (best motion picture - drama). Actually, the fact that John G. Avildsen won the Oscar for best director while that same year Scorsese wasn't even nominated for "Taxi Driver", can only cause chuckles from movie buffs. Still, "Rocky" is one very good film with a calm and well thought out iconography of old school, and its reputation would be even greater hadn't it been followed by weak sequels. Sylvester Stallone, nominated for an Oscar as best actor and screenwriter, gave probably the greatest performance of his career as the tough/ gentle title hero, even though he has an awful accent, but the small star of the story is the enchanting Talia Shire as the shy Adrian. Indeed, the sole character of Rocky is much more sympathetic when he jokingly calls Adrian towards himself in bed in order to "protect her from dangerous insects" than when he drinks raw egg yolks in a beer mug, but the characters and the naively optimistic story were still set up in an intelligent and ambitious way.