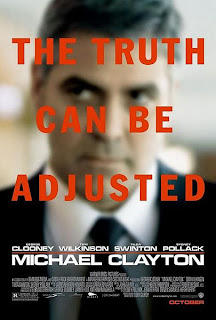 New York. Michael Clayton is an attorney working in a law firm as a "janitor", someone who cleans up messy situations. But at 45, he owes 75,000 $ due to a failed new bar with his brother, and then he gets informed that his old friend, lawyer Arthur, went crazy and stripped naked in the middle of a deposition involving a class action lawsuit against the firm's largest client, U-North. Arthur tells him that he has a bad conscience and doesn't want to sue all those innocent people on farms who became sick due to U-North's poisonous herbicide. Threatening he will go public with these informations, Karen Crowder, U-North's chief counsel, orders her men to have him killed and to make everything look like suicide. When they plant a car bomb to kill Michael too, he sets them up with a hidden microphone and has them arrested.

Just like "Erin Brockovich" and many other overhyped films, "Michael Clayton" is just a solid achievement that tries to imitate the powerful social commentary films from the 70s. Following his row of political, left-wing films that criticize the state of the world, George Clooney accepted the leading role in this interesting, but lifeless, overstretched and unexciting drama that directly shows how huge companies are willing to resort to lies and murder just to keep their profit going and hide the truth, which is brave, but is nothing new since it has been already shown in various films before this one. The best performance was done by the brilliant Tom Wilkinson, playing the "converted" lawyer Arthur who suddenly gains morals and says such lines like: "I realized Michael, that I had emerged not from the doors of Kenner, Bach, and Odeen, not through the portals of our vast and powerful law firm, but from the asshole of an organism who's sole function is to excrete the... the... the poison, the ammo, the defoliant necessary for other, larger, more powerful organisms to destroy the miracle of humanity."

Or when he recollects when he went to some place where two Lithuanian prostitutes waited for him: "I couldn't believe *that* was my life!", and quite frankly, he should have been the main character because his transformation could have made an excellent film. The concept of a successful person who suddenly hates his/her life and wants to find humanity was always miraculous, but here it was unmiraculoused by anemic approach. The first half is very boring, while the second one is better, but still hardly exceeds the frames of solid due to plain execution, and it's a pitty it is never clearly shown what outstanding things does Clayton exactly do as the "janitor". Otherwise great actress Tilda Swinton delievered one of her weaker performances, but won a BAFTA and Oscar anyway because they wanted the political message of the story to be remembered. The happy ending doesn't help either, since a dark ending would have had much more merit. The message is great, but the film is tiresome.

Agreed. I cant understand the hype that surrounded this film. It was nothing at all special.