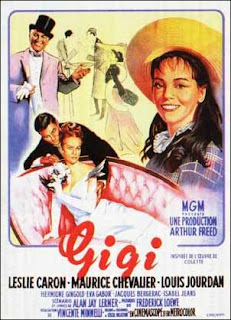 Paris around 1900. Old Honore tells how he likes young girls, especially the naive Gigi. She lives in a small apartment with her grandmother, a former courtesan, and is educated by her aunt Alicia who teaches her that a lady must be polite in marriage, but that men are not faithful. Honore's grandchild is the rich Gaston who is bored in life and has a relationship with the older Liane, but leaves her after he catches her kissing an instructor. Gaston often sees Gigi and falls in love with her after taking her to sea. The grandmother refuses that Gaston should be Gigi's lover until he promises that he will take care of her in his house. After a long hesitation, Gigi accepts, but he leaves her on a fancy party. Still, he marries her in the end.

Humorous musical "Gigi" offers a pompous set-design, costumes and songs, it won 3 Golden Globes (best motion picture - musical or comedy, director, supporting actress Hermione Gingold) and 9 Oscars (including best picture, director and screenplay) but with time it became dated and boring. It is not clear at all why Vincente Minnelli won an Oscar for best director because he crafted it completely conventional, making some movie buffs question what the academy means by "best director", but at least the movie's running time are reasonable 2 hours, unlike the overrated musical "My Fair Lady" that lasts for overlong 3 hours. It is still interesting to watch how authors transformed such a tricky subject revolving around courtesans into a cheerful and innocent song parade, filled with amusingly camouflaged "sympathies" towards lust (in the exposition, the old Honore looks into the camera and tells how he likes young girls) and occasional quirky dialogues between him and the sleepy Gaston ("They bore me!" - "But I know them longer than you, ever since childhood. How do you then think they bore me?" or "Isn't the Eiffel tower amazing?" - "How high was it yesterday?" - "1,000 ft." - "And how high will it be tomorrow?" - "1,000 ft." - "That's boring!"). It's amusing, for instance, when all the guests "freeze" when Gaston enters a restaurant, but the dancing sequences don't have any charm and fail to turn into something special. Also, Gigi ends up as a one-dimensional character while the camera is stiff. "Gigi" is a good light film, but today it's more than obvious that it was overshadowed by such classics like "Touch of Evil", "The Hidden Fortress" and "Vertigo", none of which were even nominated for best picture that year.