Memoirs of an Invisible Man 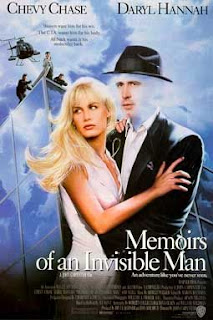 San Francisco. Unknown, lonely stock analyst Nick Halloway meets the beautiful Alice and falls in love with her. The next day, while attending a conference in a laboratory, he falls asleep. But due to an accident, half of the building becomes invisible, and when he wakes up, he notices he became invisible himself! That's why one government official is chasing him with his crew, ignoring his boss, in order to use him as an agent. Nick hides at Alice's place and tells her about his trouble and she helps him. After the government man dies, the case is shut up and Nick, still invisible, and Alice go to live in the mountains.

"Memoirs of an Invisible Man", although not critically acclaimed, are the best film in which Chevy Chase starred in, in for him unusually serious edition. The open-ended conclusion is undoubtedly weak, but the whole story up to it leaves a high, inventive impression in exploring the theme of an invisible man - from the visual style, like when the smoke from the cigarette forms his invisible lungs or when the mirror shows just Alice's reflection, but then the camera turns around and shows her together with Nick, up to the symbolic story and motif of lonely, unnoticed people. Director John Carpenter rises to the occasion, showing his surprisingly good sixth sense for romance, humor and drama, the screenplay by Robert Collector, Dana Olsen and William Goldman is wonderfully structured, incorporating a political subtext and a great film noir narration of the protagonist that blends in with the Hitchcockian mood, some moments are outstanding (Nick threatening the operative Jenkins in his office, telling him that his soul is the only thing he has left) while the action is also interesting and well conceptualized, together with the aesthetic mood. Even though it will probably remain "invisible" in the cinema history and criticized by many for all the wrong reasons, "The Invisible Man" is a stylistically pleasant and very competently made mainstream film.