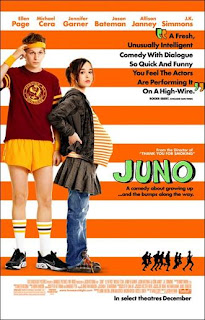 The cynical Juno (16) discovers she is pregnant after sleeping with her high school friend Bleek. Her friend Leah is surprised and Juno decides to have an abortion. But once in the clinic, the gets cold feet and decides to have the baby, but give it to adoption. She brings the news to her parents and contacts a young, childless couple, Vanessa and Mark, who are willing to adopt her baby. In winter, Juno and Bleek somehow go different ways, and then it is discovered that Mark is divorcing Vanessa. Still, Juno gives birth to her baby and gives it to Vanessa, then falling in love with Bleek.

The US must have some very talented strippers when they can write such clever stories like the one that turned into the movie "Juno". Diablo Cody wrote the screenplay about a cynical outsider teenage girl in a very refreshing manner and won several awards for it, while director Jason Reitman managed to shape a simple, accessible and funny, but also clever movie out of it. Filled with wonderful characters, uncomplicated events, a good pace and subtle emotions, "Juno" is an excellent film that shines the most with its main actress, the brilliant Ellen Page, who delivered a stunning, smashingly relaxed performance as the title heroine who says some of the most darnedest lines ("I still have your underpants", says Bleek to her, and she replies with: "And I still have your virginity!"; when her labour starts, she decides to inform her parents by shouting: "Thunder Cats, Go!"), whereas the complaints of some critics that the story is thin stand, especially when we don't get to see some more interesting details about her teenage pregnancy, like how do the teachers react to her during the class, and some darker subplots have been avoided, but they must also know that not every film must be melodramatic, depressing and filled with negative energy. It's an optimistic, sweet achievement with positive energy that fills its norms as fast as Juno's belly, and it is always nice to find little films that manage to become big.