Nadia: The Secret of Blue Water 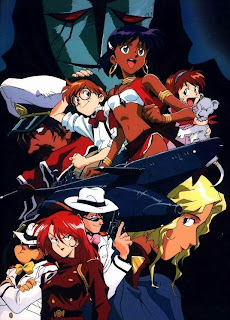 Paris, 19th Century. Teenage genius inventor Jean attends an invention exhibit and saves the mysterious Nadia and her grey cat from evil woman called Grandis and their two clumsy assistants Samson and Hanson. Jean immediately falls in love with Nadia and decides to bring her to Africa with his improvised plane, because she believes there is her home. But due to a malfunction, they fall into the Mediterranean sea and get into the submarine led by Captain Nemo. He releases them and they go to a mysterious island of the evil organisation New Atlantis that wants to use Nadia's magical blue rock to destroy the world. But their satellite destroys their won island, forcing Jean, Nadia and the orphan Marie to run back to Nemo's crew. In the end, Nautilus goes to space and destroys the spaceship of the evil organisation. Jean and Nadia get married.

Despite a few extraordinary and imaginative episodes, "Nadia - The Secret of Blue Water" isn't a completely satisfying anime because it's dominated by machines and plot devices, and not by the more wanted enchanting characters, humor, romance or, the most important of all, magic. "Nadia" indeed has all those above mentioned virtues, even interesting characters like the attractive red haired bad/good woman Grandis who is already now a legend, but they somehow seem uneven in the end. The Nautilus submarine is of European heritage, but the ideas that Nadia discovers that Nemo is her father, Jean's dream where he imagines he invented a new sun and placed it in the sky, an island that travels through the sea because it's a modern, camouflaged ship or that the people of Atlantis have survived and now plan to take over the world are, without doubt, by it's genius from Japan's mentality. Hideaki Anno is a brilliant director, and the pilot episode knocks you over with his talent, but his biggest flaw is the studio he works for, Gainax, that was so cheap at the budget that it even created a few mistakes in inserting gigantic filler episodes (Jean and Nadia ignore each other 90 % of the time which is a pity) that wreck the structure of the story with the infamous "Island episodes" and dumb, excessive chases from Europe to Africa, sometimes even falling into trash, like in the episode where Nadia discovers she is an alien! Out of 39 episodes there are too many of those that are unnecessary, but the ending is without doubt excellent (among others, the spaceship crashes with the Eiffel tower), hinting how Anno really has potentials, which were shown 5 years later in his masterwork "Shin Seiki Evangelion".