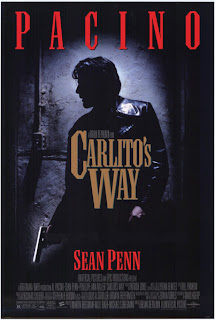 Carlito Brigante is shot at night and remembers his life: in '75, thanks to the skillful lawyer David Kleinfeld, he was released from jail after 5 years, even though he was suppose to stay there for 30. Back on freedom, he tries to avoid drugs and criminals, but when he goes as a backup with his cousin who went to carry out some suspicious job, but falls into a trap and gets killed. Carlito gathers 25.000 $ and buys half of a disco-club in order to rearrange it into a profitable business, also renewing his relationship with Gail. He often invites David to his club, even one time starting an argument with Benny, a young criminal, but avoids any kind of violence to not land in prison again. David persuades Carlito to pick up mobster Tony on his ship, but then kills him. The mobsters kill David, while Benny assassinates Carlito.

Despite a few occasional mannerisms, misogynistic touches and clumsy elements, Brian De Palma was still one of the most underrated directors of the 70s and 80s, an author who knew how to make a few masterful films, thus it's really surprising he was never nominated for an Oscar, a Golden Globe or a BAFTA, obviously because he rubbed some people the wrong way. In the 1990's, he got out of the shape a little bit, yet still continued with a few quality films, like "Carlito's Way" where he was once again united with actor Al Pacino after 10 years. It's a film with a lot of virtues, but alas, as a whole one can't exactly say the result is sparkling, depending upon how everyone looks at it. It ends up looking too much like a conventional, standard crime film without innovative energy, humor or charm, whereas many supporting "wise guy" characters end up looking irritating. Pacino is once again flawless in his role - in one scene, when his character Carlito gets released from jail, he cynically thanks the people who arrested him using illegal means to gather evidence, brilliantly underlying his personality - and the story has clever details, like when the gangsters deliberately wound Carlito at night, when there's the least amount of doctors working in the hospitals. Sean Penn is also brilliant and almost unrecognizable as the crazy lawyer David Kleinfeld, while the story neatly mixes messages about how people can't get away from their past, except that it's a little bit too predictable and tedious. The film was nominated for 2 Golden Globes - best supporting actor Sean Penn and supporting actress Penelope Ann Miller.