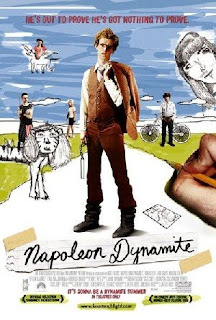 The somewhat strange teenager Napoleon Dynamite lives with his grandmother and his 32-year old brother Kip. After the grandmother gets injured, Napoleon's uncle Rico shows up in order to watch after them, persuading Kip to help him sell various products. Napoleon is an outsider in high school, making friends with Pedro. In order to find a girlfriend for the school dance, Napoleon draws a picture of Trish in order to win her affections. She agrees, but dumps him on the dance, yet Deborah saves the thing by deciding to dance with him. Later on, Napoleon tries to help Pedro get elected as the class president and hooks up with Deborah.

Hated by some, hailed by others, this independent cult comedy is a (deliberately) strange experience, a plotless, pointless, shapeless, yet charming little film about teenage outsiders living in a province surrounded by sand dunes, whose potential sympathies depend a lot about the viewer's taste. Basically, the movie isn't about anything except random vignettes from teenage lives, yet it's shifted tone and surreal setting somehow give it a dose of irony, while Jon Heder is simply hilarious as the unusual title protagonist. The straightforward direction by Jared Hess never even once pretends to be anything more than a relaxed parody somewhere between trash and pulp, and in that it succeeds completely, while none of the gags are something extraordinary, but even their simple basis has appeal, like in the scene where Napoleon tests the (obviously) non-functional time machine shaped like a box that was bought by Kip from the Internet. It's not a film for everyone, but if you're in the mood for something surreal, then this unusual comedy is rather modestly amusing.