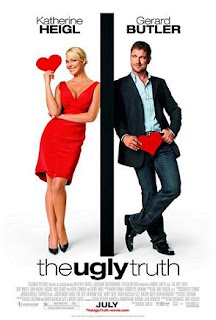 Sacramento, California. TV producer Abby is appalled when her channel hires Mike to star in "The Ugly Truth", a show where he gives very unpleasant observations about male-female relationships. She finds his attitude sexist, but decides to have a bet with him: if his advice helps her land in bed with the attractive neighbor Colin, she will stop opposing the show, but if he fails, he will quit the station. Mike's advice helps Abby to "sexualize" a lot, but in the end she choses him over Colin.

If it weren't for the disasterous "vibrating undies" sequence, romantic comedy "The Ugly Truth" would have probably faired better with critics than it did because it is one of those romantic comedies that avoid idealism and have a rather "down to Earth" attitude: there is no romance without good looks. Such a subversive jab at human species could have been elaborated in a lot more satirical way than it ended up here, yet thanks to the charm of its two main actors, Katherine Heigl and Gerard Butler, the movie still has some credit even in the second half which lost its inspiration from the start. Too bad the screenplay (written by women, actually) did not stick with its initiall premise - the clash between idealistic-elevated (Abby) and erotic-seductive (Mike) views at romance - since it is obvious both of them inevitably stumble into each other's territory, instead of wondering off into the predictable happy ending, yet it has its fair share of fine jokes, such as when, just after they met and may go out on a date, Colin escorts Abby outside his home and shuts the door, but then figures he still has to return her cat, so he opens the door again just to "interrupt" her in the middle of a "triumphant" happy dance.