It Started in Naples 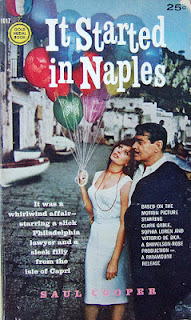 Philadelphia lawyer Mike arrives to Naples, Italy in order to settle his brother's estate following the death of the latter. He also plans to take custody of his brother's son, the 9-year old Nando, and bring him to live in the US, thinking that Naples "does not suit him". However, the attractive Lucia wants to take custody of Nando, too, and have him stay in Italy. Mike's lawyer Mario suggests him to seduce Lucia, but they both fall for each other naturally. In the end, Mike decides to stay with Nando and Lucia in Naples.

If it was not the penultimate film starring Clark Gable, humorous drama "It Started in Naples" would not have been remembered for anything much memorable since it is a mild and schematic, but easily watchable harmless fun that manages to ignite charm here and there. Long before "Paper Moon", this movie showed a little kid, the 9-year old Marietto, smoking, yet without the sophistication of the aforementioned classic, the kid here just ended up as a juvenile delinquent and a "third wheel" in the relationship between Mike and Lucia (excellent Sophia Loren). Just like in Gable's best film, "It Happened One Night", in this romantic comedy a man and a woman also argue most of the time until they fall for each other, except that their arguments do not radiate even half as much of spark or charm as those 20 minutes in the last third of the story, when the Italian lawyer humorously suggests to both to seduce each other to "settle the matter out of court": too bad the whole movie was not as untrammelled as those 20 minutes, especially in the bar sequence where Lucia speaks to Mike in English, but secretly refers to the waiter in Italian and orders a strong alcoholic drink for Mike, in a moment where Loren showed all of her magic with just one giggling. The locations are also opulent while Gable is equally indestructible in a few inspired dialogues, such as when Lucia teases him that she just "seduced him as a game", upon which he replies: "And it may replace water polo, except that it is a little bit rough".