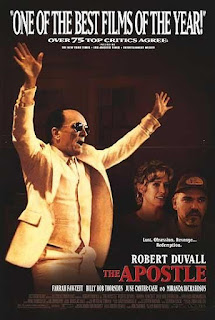 Sonny is a lively Pentecostal preacher who does everything to attract the crowd into the church: he is singing, dancing and holding strong speeches. He is married and has two kids, and does not miss out the opportunity to bless injured people after a car crash. When he finds out that his wife cheats on him with Horace, Sonny hits him with a bat. Horace falls into a coma and dies. Sad, Sonny leaves his city and wonders across the country until he meets priest Charles and introduces himself as apostle E.F., begging him to build a church. After doing so, he attracts a lot of religious people and even converts a bully who wanted to destroy the building, but then the police finds and arrests him.

This strong and lively drama energetically covers the theme of religion and the Pentecostal culture, and the biggest kudos goes to the fact that it shows it as something that makes people happy and cheerful, avoiding to be dogmatic or rigid. Such an approach resulted in a few brilliant moments channeled through the inventive ways with which preacher Sonny attracts a wide audience in order to reach them: "Make way, stars, Mars, Jupiter, I am going to Heaven!"; while holding a speech a translator simultaneously translates his words in Spanish; he has the "ABC of sin"; fights for the church...Sonny is truly a fascinating character, precisely because he is not always right and sometimes has to correct his own mistakes first before moving on in life. Robert Duvall produced "The Apostle" himself inspired by similar preachers throughout America, and for his performance he was nominated for an Oscar as best actor: Nicholson took away the award for "As Good as it Gets" even though Duvall was better, yet "As Good as it Gets" was a better film so the Academy probably went with that. A few melodramatic solutions and roughly patched events reduce the enjoyment value, yet "The Apostle" manages to intrigue even non-religious viewers.