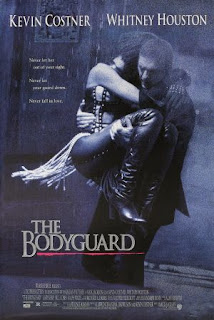 Famous singer Rachel Marron is this year even nominated for an Oscar as best actress in her film. But, due to anonymous death threats, she gets a tough bodyguard, Farmer. At first, she finds him unnecessary, but with time they fall in love. Eventually, when she wins the award, he stops the assassin from taking her life.

The screenplay for "The Bodyguard" was for a long time held in a bunker, and when it was finally green lit and adapted for the big screens, it did not receive praise from the critics. Truly, that blend of thriller and romance is kitschy, sometimes unconvincing, executed with a lack of quality and awe. However, it is still far from a routine film since it has a lot of touching, good and interesting moments equipped with humor in order to avoid turning too serious, which secured it popularity among the movie goers. The story is able to engage the viewers, the main plot revolving around the bodyguard caring so much for the person he protects that he even falls in love with her is irresistible, whereas despite some 'rough' edges the ending skillfully ties up all the loose ends, awakens emotions and respect, whereas Whitney Houston is surprisingly good and natural in the leading role - one of only five movie roles in her entire career - especially when she is in her element, singing that enchanting song "I Will Always Love You" which is simply perfect.