The Man Who Knew too Little 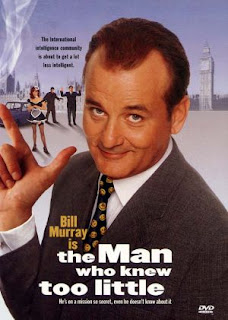 On his own birthday, American Wallace Ritchie decides to visit his brother James in London, but since the latter is preoccupied with an important business dinner, he decides to get rid of him for a couple of hours by sending him to the experimental "Theatre of Life" where participants have to take an active part in an improvisational crime play. However, Wallace accidentally takes on the identity of a real spy when he meets Lori and plays on thinking it is all part of the show, thus by chance foiling a plot to assassinate two ambassadors which would have led to a new Cold War between London and Moscow.

Taking Shakespeare's remark that the "whole world is a stage" to an insane level, Jon Amiel's comedy "The Man Who Knew Too Little" had potentials, but only the first and the last 20 minutes are fun, while the whole middle part is a mess: the movie is, unfortunately, heavy handed, disproportional and - worst of all - forced at several occasions, which is a pity since the legendary Bill Murray is equally as good in trying to mimic the tone of Clouseau in "The Pink Panther" and even better than Myers in "Austin Powers". Still, playing dumb roles somehow does not suit him as well as playing strong and intelligent cynics (his Wallace must really be stupid when he does not realize that he is firing with a real gun when he makes a hole in the wall with a bullet), even though this is one of his rare 'happy' characters.

Only the finale where he accidentally dances holding a babushka with a bomb in it works fine because it shows him in a superior role by chance, as opposed to the rest of the story where Murray is just a klotz, and basically has to improvise himself to ignite the empty-cheap middle part of the script. The old couple in SM clothes is the low point of the movie, the character of Lori is pointless whereas some plot holes (does Wallace really think that the whole London is part of the show?) were not disguised adequately, which is a pity since the story had several plus points going for it: Alfred Molina almost steals the show as the bad guy Boris (in one brilliant joke, he stands in front of a waiter, measures him with his hand, concluding they are both equally tall, so he just karate knocks him unconscious in order to take his clothes and enter the dinner party); the main plot is deliciously subversive (former secret services from both London and Moscow try to stage a "false flag" attack in order to start a new conflict between their two states, so that they can again get more funding!) and some small details were quite clever, such as the opening credits where two "unreadable" hieroglyphs are merged to form a message.