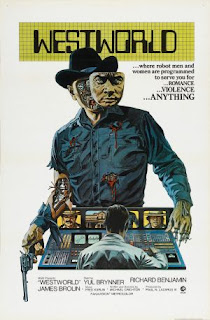 In the future, Peter and John visit Westworld in "Delos", an amusement park that recreated the Wild West using androids who "play" cowboys. For 1000 $ a day, guests can sleep over in a saloon with android prostitutes or, in Peter's case, shoot a Gunslinger. However, after a malfunction in the main control room, Gunslinger goes berserk and shoots John for real. He also starts persecuting Peter who runs away on a horse. Hiding in the control halls, Peter manages to destroy Gunslinger using a torch.

Michael Crichton must really hate amusement parks - not only does he feature a negative jab aimed at them in his "Jurassic Park", but also a thematically similar one in his previous achievement, "Westworld", except that here androids attack the visitors, and not the Dinos. The story stands out all by herself thanks to its unusual blend between science-fiction and western, posing some thought-provoking questions, sharp observations about decadence and simulated reality as well as an untypical role of Yul Brynner in one of his last performances as the cold, bizarre android Gunslinger, who seems like his Cowboy from "The Magnificent Seven" on acid, but some naive solutions and heavy handed plot holes diminish the enjoyment value a little bit (for instance, how dumb must have the architect been when he designed the control room in such a way that once when the electricity is off, nobody of the scientists can get out or simply manually open the door? Or why in the world would they give androids real bullets and thus put guests in real danger?). The final third of the movie is the best: it offers that raw suspense when Peter is running away from the robot Gunslinger, almost as some sort of a forerunner to "The Terminator", though not as intense or as perfect as the latter.