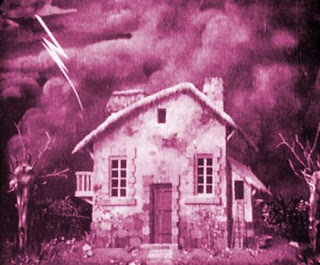 One night, two men and a woman hide from a storm in an abandoned house. However, strange things start happening there: an image of someone— probably the owner—appears on a painting on the wall; the chairs start disappearing; their table is served by itself and the house is eventually tipped. A giant image / ghost of the owner eventually takes the three people and transports them from their bed to the forest.

One of the unknown pioneers of the early cinema, Segundo de Chomon advanced the possibilities of film by using stop-motion tricks and a more dynamic camera, picking up something from Melies but also adding a lot of his own, which makes it more of an oddity that he is barely taught at film classes. Even though his 6 minute short "The Haunted House" is somewhere disputed because it is a French remake of Blackton's "The Haunted Hotel", which basically tells the same story, and sometimes carries even identical scenes (the ground-breaking stop-motion moment where a knife cuts food on the plate and a coffee is poured in a cup all by themselves)—it is still a prototype example of rudimentary horror, one of the first editions of the 'haunted house' genre. De Chomon has a good build up of mood (the opening establishes a creepy feeling when the three wanderers enter an abandoned house one rainy night, all in just two scenes), even though some moments today seem more amusing and comical than scary (the house tilting while the people are in bed; a transparent, giant image of an unknown man appearing), yet in both cases they constitute a fine little cult classic that is easily watchable and engaging.