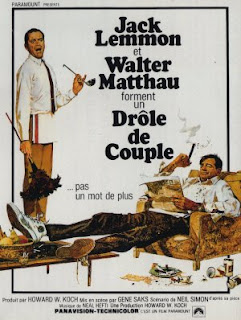 Introverted Felix is affected by the the fact that his wife left him and took their kids. When he tries to commit suicide by jumping off from a building, he cannot open the window and gets a cramp in his back. His friends calm him down and tell him that there is a lot worth living for, whereas colleague Oscar, also divorced, takes him into his apartment. The odd couple quickly turns chaotic: Oscar is messy and is annoyed by Felix constantly cleaning rooms and cooking. After two ladies invite them to their apartment, Felix rejects them, so Oscar throws him out of his apartment. Later on, he apologises.

"The Odd Couple" is not so fresh today, but is still a good comedy nonetheless that gains its source of agility from the chemistry between comedians Jack Lemmon and Walter Matthau (both nominated for a Golden Globe in a musical or comedy). The screenplay by Neil Simon (also nominated for an Oscar) actually offers an anecdotal little story about two divorced friends living together and clash due to different perspectives, equipped with a few funny jokes: in one comical moment, friends tell Oscar that he has a messy apartment before he answers the phone, so he replies to them: "Yes, I am divorced, messy and broke! (phone rings) Hallo? Divorced, messy and broke?" Felix is an equally comical character, an introverted counterpart for Oscar, who among others moves his jaw up and down and makes strange noises ("Mbwab!...Mbwab!") when he wants to unclog his ears. Today, one could almost decipher hidden gay subtexts from their feuds, especially since Oscar even jokingly tells him "yes, dear". Still, it is obvious that Saks does not have a sure director's hand in this occasion, whereas other flaws are a lukewarm mood and a fair share of not so funny jokes.

It just makes me feel nostalgic - I used to watch this film when I was still a little kid together with my mom... I miss those times as well as I miss my mother...

how to edit a picture