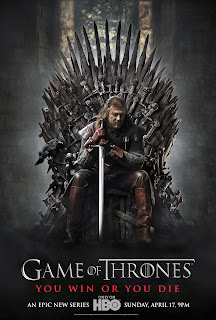 In an alternate history world, where winter can last up to ten years, the large Seven Kingdoms span continent Westeros. On the north, they are sub-governed by Ned Stark who is in charge of protecting the Wall that separates the Seven Kingdoms from the unknown land. Ned is invited to the capital on the south by his friend and king Robert Baratheon and intends to investigate why the king's right hand was killed in mysterious circumstances. Ned finds out the king's wife, Cersei Lannister, actually had an illegitimate son, the cruel Joffrey, but is not able to inform Robert who dies in an accident while hunting. Ned is arrested and hushed up by being sentenced to death. However, Ned's family starts a war with the Lannisters because of that. In the meantime, the banished heirs to the former king, Daenerys and her brother Viserys Targaryen, join forces with the nomad war tribe headed by Khal Drogo to get back the throne of the Seven Kingdoms.

When HBO decided to adapt George R. R. Martin's novel series "A Song of Ice and Fire" for the small screens, they picked right and gave a series that at times almost seems as if it is meant for the big screens. A complicated, ambitious but engaging project, "Game of Thrones" observes off-stage plots, intrigues and ploys by several fractions that all want to take over the throne and rule the fictional Seven Kingdoms, yet shows complicated characters (except for the one-dimensional bad guy Joffrey) that refuse the tempting cliche of good and bad descriptions and present a multitude of perspectives. In episode three, for instance, kingsguard Jamie Lannister tells how he killed the mad king Aerys Targaryen because the latter wanted to kill all children and women. In doing so, Jamie probably saved thousands of lives, but history will always remember him only as the "King murderer". At the opposite side, the exiled Targaryen heirs thus despise the Seven Kingdoms and want to re-gain the throne because they consider themselves victims of an illegal coup-d'etat; Viserys Targaryen thus arranges his sister Daenerys to marry the brute leader Drogo of a war tribe so that he can use his army to return to the throne, and even says to her: "I would let all 40,000 of his soldiers fuck you as long as they help me march back to the throne."

Some lines are an example of inspired writing: when king Robert slaps his wife, she remains calm as she refers to her bruise: "I will wear this as a badge of honor!" After king Robert was mortally wounded by a boar during a hunt, he jokes that the capital should organize a farewell feast to remember him - and serve the boar that killed him as the main dish! The storyline is not perfect, however: the subplot of the Wall in Winterfall does tend to give an appearance of a "third wheel" here and there, and not as a natural cohesive whole to the main plot in season 1. Likewise, the first five episodes, directed by Van Patten and Kirk, were the strongest, while the remaining five, directed by Daniel Minahan and Alan Taylor, are good, but make several 'rough' solutions or too brutal moments (Viserys' death is an awful ending to episode six; the vile scene of Daenerys eating raw meat), the "trial by combat" in episode six is ridiculous, whereas episodes nine and ten were pretty bad. One major detrimental flaw is too much 'empty walk' and ponderous talk of the storyline, which take way too long to finally get to a point. Still, the density of events manages to compensate in this season, kudos also to very memorable characters Ned Stark (brilliant Sean Bean), dwarf Tyrion who jokes that being the brother of the queen is his "biggest accomplishment" and always great Sibel Kekilli as Shae. "Game of Thrones" accomplished a strong impression in season one, with several great moments, but there was still something missing to be considered a true classic of epic 'raw' politology such as "Legend of the Galactic Heroes".