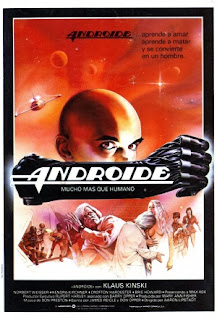 In the future, after an android uprising in Munich, all humanoid robots are forbidden on Earth. That is why Dr. Daniel is continuing with his experiment - Max 404, an android that looks like an ordinary human - on a space station. Their idyll is interrupted when they are visited by three outlaws, Mendes, Keller and Maggie, fleeing from space police. Dr. Daniel at first wants to get rid of them, but changes his mind when he spots a woman among them, because he wants her as a model for a female android. After Mendes kills Maggie and Keller, Dr. Daniel programs Max to kill Mendes. Max rebels together with Cassandra, the female android, and they get rid of Dr. Daniel. The police arrive and think they are humans so they manage to get to Earth.

Overshadowed by the thematically similar "Blade Runner" released the same year, that said almost everything about replicants (=biological androids), their identity, "artificial" emotions and their interaction with real humans, Aaron Lipstadt's "Android" did not manage to intrigue with the same repertoire, only set on a space station, yet a few neat surprises and interesting touches assured it a minor cult status. With too little of Klaus Kinski and inspiration, and too much of Max (very good Don Keith Opper) as a human and not as a robot, "Android" does not have the density, wit or charm to engage, which is why those scenes that do work and are good stand out too much from the rest of the storyline - in one example, the angry Max prepares a dinner for his "creator" Dr. Daniel (Kinski) who is on a date with Maggie. Upon arriving at the table, Daniel is angered when he finds out Max cut his flowers, orchids, in the garden as an excuse to put it on the table for Maggie as a "present". Another clever exchange comes up when Dr. Daniel is shouting at him for doing many things wrong lately, and Max replies: "Maybe you made a miscalculation in my memory circuit, Sir." There are traces of android rebellion, but also themes of a child growing up and resisting his/her parent, though they should have been done with more sharpness. If there is one highlight that lifts the movie up to almost something better, then it is the clever ending that neatly tied all the loose ends together.