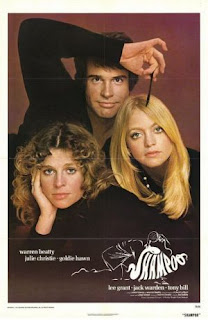 Beverly Hills, '68, a day before Nixon's victory at the elections. George is a young hairdresser and womanizer who slept with countless women, now trying to get money for his own hair saloon from businessman Lester who is in a relationship with Jackie but has a secret affair with Felicia - both of whom are George's ex girlfriends. Meanwhile, George doesn't have time for Jill, also his ex girlfriend, but slowly realizes he loves Jackie. He proposes her, but she decides to stay with Lester.

Out of all the films he directed in 1970's, his most inspiring phase, Hal Ashby's "Shampoo" reminds the least of a real Hal Ashby film. That satire on the downfall of the rich swingers (the elite class), who pretend to be happy citizens although they are deeply unhappy and don't know what they want, lost from it's own eyesight what it wanted to say in the second half and became overstretched, forcefully funny and too bizarre (though the sequence at the party in which the drunk Jackie says out loud to George: "I wanna suck your dick!" is truly something unbelievably brave even for the 1970's Hollywood), whereas it's rather surprising that actress Lee Grant was nominated for a Golden Globe and actually won the Oscar as best supporting actress since her pale character of Felicia has very little screen time and gets easily overshadowed by the shrill Julie Christie. Still, here and there an occasional genius scene shows up (the refrigerator door opens and it's light illuminates George and Jackie during intercourse, much to the surprise of their friends who didn't expect to spot them there). A few years later Ashby pulled off a much better critique on the expense of the empty lives of the rich elite in the unforgettable, miraculous and authentic masterwork "Being There".