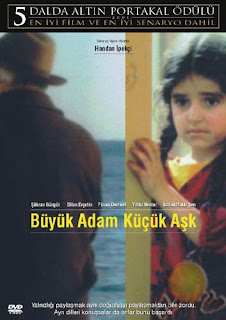 An old Kurdish man, Evdo Emmi, brings a little orphaned girl, Hejar, to his relatives in an apartment in Istanbul. But the Turkish police storms in the apartment and kills everyone, except Hejar who sneaks into the neighboring apartment of the old retired judge Rifat Bey. At first, he is annoyed by her presence and demands from his housekeeper Sakine, who is also a Kurd, to get rid of her because she doesn't speak Turkish. But slowly his heart softens and he begins to care about her. He goes to a small village and finds Emmi, but decides not to tell him anything in fear that Hejar would be in dreadful, poverty struck circumstances there. In the end Emmi finds Hejar and they leave, while Rifat looks sadly from the window.

An average viewer might think this touching and sweet little drama is just a run-of-the-mill film about an old man softening when taking care of a little girl, but considering he is a proud Turk and she a fragile Kurd the director Handan Ipekci added a sly political dimension to it by presenting the taboo subject of what Turkey is doing to Kurds, which is why "Hejar" was banned in it's homeland for some time, namely for stating that hegemonism isn't the solution and that accepting others brings to mutual understanding. Political and sociological commentary aside, this is a good, spiritual and simple film, but too slow and ordinary to be anything more. It proved to be the last film of Turkish actor Sukran Gungor who died a year later. There is just a sparse charm between the interaction of Rifat and the little Hejar, since most of the scenes were reduced to just the arbitrary, like when he washes her hair to get rid of her louse or when they go to watch a cartoon in cinemas together, yet the authentic emotional touch can't be denied in the really sad finale that brings a real emotion across, and not just a fake gimmick.