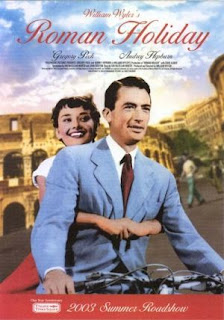 Princess Ann came to Rome for an official visit. She acts seriously in front of guests and famous politicians, but privately such a formal life is stressful and hardly tolerable for her. That's why she runs away one night and falls asleep on the street. Reporter Joe meets her and accommodates her in his apartment, not knowing who she is. The next day he reads the newspaper and realizes a real princess sleeps in his bed, so he decides so secretly ask her about her views in order to have the interview of his life. He spends the day with her while his colleague Irving takes pictures of them. But when she leaves he realizes he fell in love and decides not to publish the cheap article.

Enchanting Audrey Hepburn won an Oscar, a Golden Globe and a BAFTA for her truly exceptional role of a bored princess in "Roman Holiday", one of the better films of director William Wyler, even though it's slightly overrated. In the exposition, Wyler and screenwriter Dalton Trumbo introduce the princess so simply humane that the viewers will nourish sympathies for her to the very end: in the sequence where she shakes hands with a whole line of politicians she keeps her serious face, but the camera shows her leg - that can't be seen under her dress - "childishly" take off her shoe and scratching her other leg. Very shrill is also the dialog between her maid and her because she doesn't want to sleep in her royal pyjama ("Some sleep naked, you know that?" - "Thank God, I don't!"), neatly establishing the 'golden cage' of the princess whose spirit is never spoiled, but just wants to live free and without duties for once. The second part of the story though, in which the reporter shows her Rome just as a pretext to secretly make an article about her, is slightly forced and superficial. The romance and his ethics are manifested only at the end, but up to that he almost turns out to be the bad guy with a secret agenda who fakes a grand day out for her just to make profit on her sensational story, yet the open ending is touching and boldly impressive.