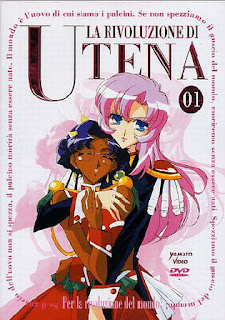 A long time ago, when she was still a little girl, Utena lost her parents, but a mysterious prince comforted her and gave her hope. As a teenager, Utena decided to become a prince herself. She enlisted as a student into the Ohtori academy and met the arrogant Saionji, challenged him to a fencing duel, won - and got his servant, Anthy, as the grand prize. Soon, many other students challenged Utena to a duel in order to win Anthy, but they all lost. Akio, Anthy's brother, is the prince and the chairman of the academy. Anthy suffers the pain of the world for him. So Utena takes her place for her. Anthy then leaves Akio in order to find Utena.

After his bravura directed episodes in the anime "Sailor Moon", director Kunihiko Ikuhara went to Be-Papas group and quickly realised "Revolutionary Girl Utena" that gained cult status, but also signaled a step backwards in his creativity. Mixing the subconscious styles of Lynch and Godard, the talented Ikuhara got an abstract mystery that repulsed many with it's pretentious elements, like the floating castle over the arena accompanied by a song about ammonites and trilobites. "Utena" is truly a tough cookie when it comes to grading it: some episodes, like the ones where Nanami shortly transformed into a cow or imagined she laid an egg, are real garbage. And then again, on the other hand, some episodes are truly extraordinary, like number 18 (a young boy, Tsuwabaki, doesn't want to try a chocolate that was partially bitten off by a girl because he is afraid of an "indirect kiss"), 19 (the girl Wakabi gives in her apartment a shelter to the fugitive Saoinji in whom she is secretly in love with and who previously ignored her) or 30 (Utena falls in love with Akio and is, as a consequence, distracted in school the whole day), subtly mixing gay confusement with identity confusement. "Utena" impresses with her ambitious iconography that carefully shapes the events into a whole and creates a unique world, while the end masterfully hints that Utena and Anthy may be one and the same person, actually split up when traumatized by incest in childhood. Still, with all of it's over-the-top symbols (cars placed vertically, thorns stabbing Anthy...), the story can really go overboard sometimes. "Utena" is something like "Catch 22": what ever it does, it somehow doesn't work they way it should.

Oh, come down: Utena is far more creative and imaginative in one finger then that overrated toy commercial $ailor Moon.

Creative, yes. Imaginative, yes. But far less cohesive, unfortunately. Some episodes were brilliant, but overall the series drowned in author's tenedency to impose abstract symbols without limit, sense or function. Believe me, I listened to the director's audio commentary on the series and when asked what all the smybols meant in the last few episodes, he himself did not have a clue! This all just leads me to one logical conclusion: a story consists out of empty symbolism.

...But Evangelion had a lot useless symbolism too. I personally think Ikuhara's pulling our leg; he knew what he was doing, he just can't describe it - too abstract.

You got a point there. However, as a whole, Evangelion is cohesive and has some kind of inner logic: you can argue that the last two episodes are either a therapeutical process of psychological cleansing/healing or that the process of "Instrumentalization" has been set off - or both. I had a feeling that Utena was trying to imitate David Lynch, yet too many details lead nowhere.

I’m just commenting on this review nearly eight years later (completely by chance) to say hi.
I apologize if I came off a bit rude in my first post, that never was my intention.
I do still stand by most of what I said, though I do regret bad mouthing Sailor Moon (a recent rewatch a few years ago shown me that it was indeed still good.)
I also regret dragging Evangelion, it’s my favorite anime and you were right to point out that’s a bit more cohesive than Utena.
Anyway, I just wanted to apologize and say hello.
I’m going to read your blog more often.

Why do you have to apologize? That is your honest opinion, and you are entitled to it. A lot of people have different opinions of art, anyway.