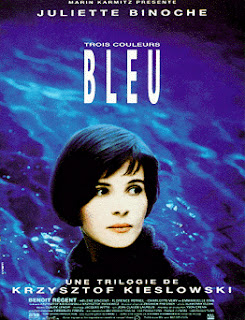 France. Julie is the only survivor of a car accident. Her husband and her daughter died. While recovering in hospital, she decides to commit suicide. After she returns to her home, she is confused and devastated, and eventually decides to simply forget her past and free herself from everything: she decides to sell her house, destroy her husband's unfinished musical composition and spend a passionate night with Olivier. She settles in a small apartment and starts living an empty life. But then she finds out that her husband had an affair with Sandrine, who is now expecting his child. Julie decides to give her her old house.

"Blue" is the first film from Krzysztof Kieslowski's trilogy "Three Colors" - that handles the themes of liberty, equality and fraternity - and also arguably the thinnest and weakest of them. The critically acclaimed trilogy was hailed for it's humane and minimalistic tone that succeeded in a synthesis of ambitious and interesting: the first film was hypnotic, the second satirical, and last one magical. "Blue" didn't quite clearly explain it's leitmotif of "liberty" and freedom, although it contains an interesting context about a heroine, Julie, that, after her family died in an accident, decides to simply "free" herself from everything; from the future and the past, from the memories and the rules, from her desires and her emotional limitations, and simply be without worries. In a way, she actually went a little bit down to the path of Buddhism. Julliete Binoche, the score and the film in the category of the best foreign language film were rightfully nominated for a Golden Globe. But not all of the situations work - one of the most banal ones is the one where Julie is doubting if she should get rid of a rat mother and it's little breed - and the minimalistic style is not for everyone's taste, but the film simply has to be seen because it's pure poetry. Kieslowski's quiet visual style is fantastic and creates a spectacle even out of the smallest bauble (a foil that flutters while it's jutting from the window of a speeding car, a feather peeping out of the pillow) creating an achievement that sharpens the senses and makes the viewer aware about the world around him, while the finale is wonderfully metaphysical.