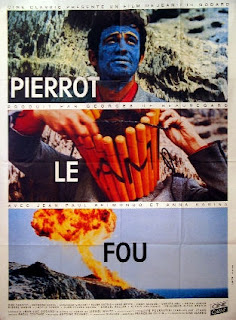 Ferdinand Griffon is married to a boring Italian woman and has a daughter. His life is average and boring, but one evening he visits a party with his wife where he meets the director Samuel Fueller, and also his ex girlfriend Marianne. Ferdinand spends the night with her, but when he wakes up in an unknown apartment, there's a corpse of a mobster on the floor. Namely, Marianne is a fugitive because she stole some money from the mafia. Ferdinand, whom she constantly calls Pierrot, decides to run away with her and hide at the beach. Since they don't have any money, they have to hunt for food. One day Marianne disappears and the mafia captures Ferdinand, but sets him loose. Ferdinand is lonely and writes a diary, but one day he again meets Marianne. During a shootout, she dies on an island, while he sets a dynamite set on his head on fire.

"This isn't a film!", screamed producer Dino De Laurentis when he first saw the screening of the wild farce "Pierrot goes wild", refusing to distribute the film in Italy. Still, that 10th film from the brilliantly inventive director Jean-Luc Godard gained cult status - in a way, it's basically a simple story about a young couple in love defying any rules, but just done on a higher level in artsy style, producing a metaphysical film beyond film itself that's without any logic and clear structure, filled with spontaneous references about the Algerian and the Vietnam War, causing a lot of viewer's to find it boring if they are not on his same wave level. The exposition is amazingly inventive; four rows of the letter A show up on the screen. Then a few rows of the letter B are added. Then other letters are added, from C, D, E, F...Up until the point where they assemble the opening credits saying; "Jean-Paul Belmondo and Anna Karina in a Jean-Luc Godard film". Godard thinks tradition and convention are anachronism so his heroes in this film suddenly start to sing like in a musical all out of the blue, while a lot of things remain (deliberately) vague. The special spark is given from the humorous scenes; Ferdinand counts from 1 to 137 while he is bowling. A mobster giant is putting the corpse of a dwarf mobster on the chair. Some madman on the beach is holding an endlessly long monologue in front of Ferdinand about his boring wife and her stupid song. Godard's films have almost everything; they are intelligent, smart, praised, ambitious, inventive...The only problem is that it's hard to enjoy them.