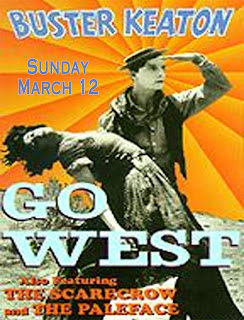 An unemployed young man, Friendless, sells all his stuff for a dollar and a half and goes to the wild west by loading into a train wagon. He comes to a ranch near the desert and truly spontaneously finds a job as a cowboy. The owner of the ranch doesn't exactly appreciate him, but his daughter does. friendless has a lot of problems with his job; he is clumsy and isn't able to catch bulls, while his best friend becomes a cow named "Brown Eyes". When the owner is forced to sell his whole cattle due to financial problems, his rival steals the train wagon where he put them. But Friendless manages to rescue the cattle and sell it, making the owner thank him.

Silent comedy "Go West" is not one of those films that are sufficient for Buster Keaton's talent. Namely, unlike his great classics like "Sherlock Jr." or "The General", Keaton here isn't able to create an iteration of magnificent humor due to childish, pale gags and underwritten, too simple story, making him rather inappropriate in the role of a cowboy. Some scenes, like the one in which Keaton is climbing on a donkey with a help of a ladder or the one where he shaves the legs of a cow in order to spare her from being branded, are cute and cause sympathy for his character, but are not anything brilliant. Only the finale is truly genius; namely, Keaton is trying to lead a mass of bulls through the city, but they won't budge and the police is getting closer. So he decides to dress into something red, a costume of the devil (!), in order to make the bulls follow him. But not only do they starts following him, but at one point they start chasing him like crazy, forcing him to run for his life.