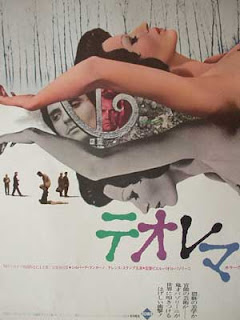 Milan, Italy. A journalists is asking random people on the street what they think about the bourgeoisie. An industry complex is empty. Lucia and Paolo are a rich middle aged couple that lives in an opulent villa with daughter Odetta, son Pietro and the maid Emilia. Via telegraph they get informed that an unknown young man is going to visit them. The stranger shows up and wakes up the urges in the family; in the following day he has intercourse with the son, maid, daughter, Lucia and Paolo himself. Although they beg him to stay, he disappears as mysterious as he appeared. The family then falls into deep crisis and changes. The maid returns to her home town and starts levitating over a house, creating a religious event. The daughter falls in coma, the son becomes an artist, Lucia starts searching for random affairs. Paolo is spotted at a train station completely naked, before he shows up in the middle of desert.

"Theorem" - a movie about a mysterious stranger who enters a home of a rich bourgeois family and turns their lives upside down because of his uniqueness - seems like an early, raw version of Ashby's film "Being There". It's an confusing, abstract, but undoubtedly ambitious psychological drama that offers some sort of critique of the empty life of the rich society. It's main problem is the lack of psychology due to empty, faceless characters. Although working with subconscious details (every 10 or so minutes a random shot of a desert is shown, acting as a leitmotif of the empty life), the director Pier Paolo Pasolini overstretched the film too much and didn't underline the highlights, but his rhythm is good; while for some the demanding atmosphere can be enriched with inventiveness, humor and original style, for him, in this case, it was just an excuse for empty scenes of people walking around their rooms and being quiet. It's not irritating, but he could have made more out of it. Maybe the mysterious stranger is a symbol for love that enters into cold lives of the bourgeoisie, and when he disappears the family members realize there is something more in life than just money and consumerism, some ideal, some perfection, making them change and fall into abstinence crisis. The best moments are surreal, like the maid who is seen levitating over her home while the people proclaim her to be a saint. Still, like "Big Brother" showed, real life is indeed sometimes close to dadaism.