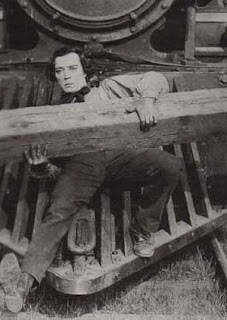 American Civil War. Johnnie Gray is a young Confederate train engineer working on the train called "The General". When all the men in his town go to enlist to fight in the war, he is first in the line but is turned down because the army thinks he is more valuable as an engineer. But his girlfriend Annabelle Lee and her father think he didn't enlist in the army because he is a coward and break every contact with him. However, one day an Union spy steals "The General" and Annabelle with it. In order to save them both, Johnnie starts chasing them in another train, "Texas", equipped only with one cannon. The Union soldiers on the other hand are fleeing because they don't know Johnnie is alone in the train. When they realize he is alone they stop, causing Johnnie to hide in the woods. He hears about their secret plans of a forthcoming attack. He saves Annabelle and makes a getaway with her in the train. The Union soldiers follow them with another train but lose, and Johnnie even manages to capture one of their generals.

"The General" is one of the most virtuoso and respected silent comedies from Buster Keaton's career, the comedian with the stone face. This excellent movie is even by today's standards funny, original, quirky, suspenseful, emotional and practically an undated achievement. Basically, it is a very simple film; over 80 % of its story consists just out of a chase between two trains and its gags are childish, but as a whole "The General" works surprisingly well, is meticulously constructed and has irresistible situations; in one particularly inventive and stylish, Johnnie's train is pursuing the enemy train. He is on the aim of his own cannon in the latter waggon, but in the crucial moment the train makes a sharp curve and diverts just as the cannon fires, thus accidentally hitting the enemy train 300 feet away in front of him. In another, Johnnie is removing a beam from the railway in front of his ongoing train by simply throwing another beam at it. In another, the enemy is again pursuing Annabelle and Johnnie with the train, and just as they are about to touch their waggon, he disengages its clutch. This is a movie of sheer inspiration, a simple display of stunt choreography, but a one that is brilliant at doing just that. "The General" is a rare kind of cinema jewel; a one so neutral it is suitable for everyone— young and old—and yet it also at the same time sharp enough to be equally enjoyable for both. It owes that to one simple feature: despite all impossible stunts and action sequences, the main highlight is still Keaton himself, and his superior comedy, whose Johnnie is a stoic hero who never complains to save his beloved girl.