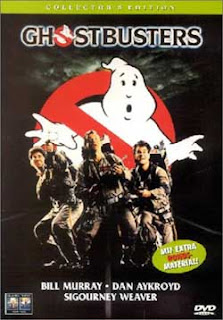 New York. A ghost appears in a library, offering a perfect inspection ground for three Columbia University parapsychologists; Peter Venkman, Ray Stantz and Egon Spengler. After coming in contact, the ghost becomes angry; the three heroes get scared and run away. When they return to the University, they find they have been kicked out. Still, Egon calculates they can theoretically capture a ghost, so they go on to open their own business as the Ghostbusters. At first, there is almost no demand for them, but one day, after they catch a green ghost in a hotel, their business blossoms. Peter even falls in love with their client, Dana Barrett, who reported a strange encounter in her refrigerator. Then Gozer, an evil Babylonian god, takes her body. After a big showdown, the Ghostbusters cross proton beams and cause an explosion that seals away the door of Gozer's dimension, thus freeing Dana.

"Ghostbusters" contains one contradiction for today's mainstream influenced audience—it is a hit that is as good as the money it earned at the box office. The film's exceptional success, that placed it as one of the most prominent comedy bastions of the 80s, can be tracked down to its handling of the ever popular paranormal themes, but indirectly also to the unusual, funny way that that those themes were presented here by actors and screenwriters Dan Aykroyd and Harold Ramis, who went into a territory—a blend between pure horror and pure comedy—that was rarely touched before. The structure and direction of the story could have been more inventive—the animated cult series "The Real Ghostbusters" from '86 contained such original ideas that they almost overshadowed the original film, like in the episode where the Ghostbusters had to fight ghosts in a space station—but despite any minor complaint, the film is still excellent for its unbelievable, sheer energy and clever fun.

One of the more subversive jabs are aimed at Reagan's America, displaying a new order where the social welfare is abrogated and the carefree people now find themselves on the streets, on their own, having to start their own enterprise to make a profit and survive (embodied in Ray's genius comment: "You don't know what's it like out there! I've worked in the private sector. They expect results!"). By presenting their enterprise as the Ghostbusters, the script slyly implies that paranormal circumstances are needed for one to succeed. Unlike other comedies for the masses, here the heroes are actually intellectuals, educated individuals who use their knowledge to analyze the situations, and thus the humor is on a higher level. From the exposition in which Peter is in an experiment giving such electric shocks to a student that the latter at one point drops his bubble gum from the mouth, through the TV host who asks Ray a unique question ("Have you seen Elvis?") up to the female ghost that gives an invisible fellatio to Ray in his bed, the film proves to be an exceptionally all-encompassing comedy, whereas Ray Parker Jr.'s song "Ghostbusters" is perfect. The story dared to be courageous, proving to have subversive satirical stabs at religion, rhythm, a hilarious Bill Murray, natural gradation of gags—and spirit.