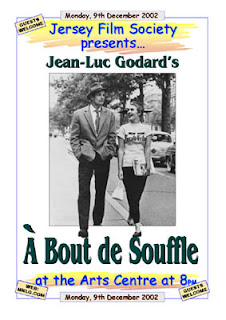 Paris. Michel is a small time crook who is having a hard time getting through life. After stealing a car, a policeman stops him for speeding. In panic, Michel shoots the cop and runs away. His only friend is Patricia, an American girl he is in love with, but she is rather cold towards him. Still, she is hiding him from the police in her apartment. Michel is also a big fan of Bogart, often impersonating him. In his get away he steals another car, but Patricia reports him to the police. He gets shot and killed. In his dying words, Michel says to Patricia; "You're disgusting". She just simply asks; "What does "Disgusting" mean"?

Some viewers always ask themselves; "From where do some famous and often used stylish ideas originate from"? For instance, the one in which the main hero is looking directly in the camera and "talking" with the viewer, that was seen in the TV show "Malcolm in the Middle" and films like "Kuffs", "Annie Hall", "Ferris Bueller's Day Off" and others. It originates right from the art drama "Breathless", the feature debut and the commercially most successful film from the unusual director Jean-Luc Godard who made a star out of Jean-Paul Belmondo; somewhere near the exposition, Michel, the main protagonist, is driving a car and breaking the fourth wall by looking directly into the camera and asking some questions. Not only that, the hand held camera and strange jump cuts in the same scene were also used here for the first time and caused a little sensation, although they are not that fascinating by today's standards. This very good film is still a little bit overrated, but thanks to the realistic script from François Truffaut the story is much more balanced from Godard's later films with over pronounced artificiality. In one scene Michel is looking at Patricia, asks her what she is doing, on which she replies: "I'm watching you". In another, he is jokingly putting his hands on her neck, saying; "I'm going to counting to three. If you don't smile until then, I'm going to strangle you". Godard's first film is an interesting homage to Paris, romance, original anti Hollywood film making and free spirit, attached with subtle Marxist messages, but as a whole it seems more like essential vegetable we have to eat, but don't quite enjoy.