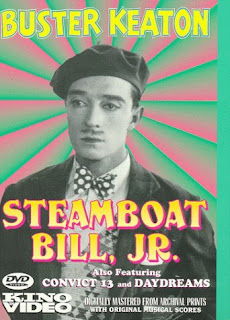 Mississippi. Two steamboats patrol the river whose owners can't stand each other; King, a rich man who is respected by everyone, and Canfield, a poor man who has only one friend. Since all citizens only want to get transported by King's steamboat, Canfield calls his son William to hep him with the job. But he hasn't seen his son since he was a kid, thus finding out William is a wimp, not a bruiser. Also, William is the Mary's lover, King's daughter. When King announces that only his steamboat is sure for transportation, Canfield starts a fight with him and lands in jail. Then a massive tornado hits the town and starts blowing cars and houses away. In the midst of the chaos, William saves King from drowning in the river and his father from jail, making them become friends.

"Steamboat Bill Jr." is a film with a small problem. But that small problem can influence the viewer's perception of the whole film. Namely, "Steamboat" contains a brilliant, absolutely smashing finale, a one that remained remembered as one of Buster Keaton's most known stunts. But up to that finale the whole film is nowhere nearly as good; it is overstretched, its gags drag and the rhythm is deferring. But if the viewer accepts that condition, that the ending is ten times better than the rest of the film, he will enjoy "Steamboat" with ease. This is a clever comedy, Keaton's last independently produced film, a simple and childish "Romeo and Juliet" story about the reconciliation of two competitive sides, and Keaton is in great form. But the most memorable parts are contained in the finale, the virtuoso directed tornado sequence; a strong wind starts blowing cars and houses away, while Keaton is defying it on the street. That spectacle lasts for about 6 minutes and among others contains the classic scene in which a wall falls on Keaton - who survives only thanks to the fact that he was standing under a window - or the one where Keaton is leaning for about 40 degrees in front of himself thanks to the strong storm. Despite being unbalanced and a little bit slow, "Steamboat" is still a very interesting film made with enough skill to remain undated.