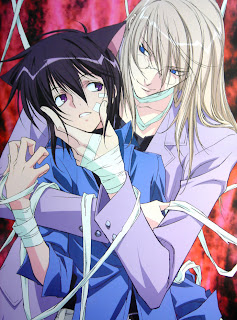 Loveless; Animated fantasy drama series, Japan, 2005; D: Yuu Kou, S: Junko Minagawa, Katsuyuki Konishi, Kana Ueda, Mamiko Noto, Sanae Kobayashi
In the world of "Loveless", every person who still has "Neko" characteristics - cat's ears and a tail - is still a virgin. Only after intercourse do those ears and tail fall of. Aoyagi Ritsuka is a 12 year old boy who was just transported to another school. Although he is still mourning because his older brother Seimei was mysteriously killed, he manages to make friends with a girl, Hawatori Yuiko. One day he meets a 20 year old student Soubi who claims to have known his brother - and who adds that he loves him. From that day on, Soubi starts a strange relationship with Ritsuka, obeying his every command. Ritsuka is confused, but Soubi saves him from school pupils Midori and Ai, members of the mysterious organization "Seven Moons" who posses dark powers. Soon other pupils show up who also attack, forcing Soubi and Ritsuka to join forces. After a wild hallucination in which he saw all of his friends killed, Ritsuka asks Soubi if he would kill him if his brother was still alive and gave him that order. He replies that he would, but that he would then be dead too. The two of them

"Loveless" is an anime that could have been so much more than just a good, esoteric, but standard achievement that it is in the end. The story has one premise that's simply astounding; in this world, every person that has cat's ears and a tail is still a virgin - only after intercourse do those features fall of. Unfortunately, that premise is so underused here it's sad. If there was ever an anime that deserved a remake or that it's original idea gets used in another series, then it's this one. For example, the supporting character of Hitomi, a 23 year old school teacher who still has her ears - thus indicating that she is still a virgin - is very well done; she is a gentle, smart, shy, emotional person, and considering the whole setting and context of "Loveless", the notion of her finding her first love is almost forcing itself on the viewer. Unfortunately, that logical addition is never shown. The only thing shown is that Hitomi has a small crush on Soubi, but never decides to do something about it, thus keeping her ears. Among the minor supporting characters, lesbian teenage girls Yamato and Kouya are also very well done; in one particularly good scene, Yamato is observing Kouya in the train, touching her ears and saying; "You should get rid of those ears...". Considering the main plot revolving around Ritsuka and Soubi, "Loveless" does a good job presenting the tangle, posing a few interesting points about fate and creating a nice, stylish mood with a gay subtext that anticipates a climax - but that climax never shows up. Having only 12 episodes that were adapted from the much richer Manga, "Loveless" feels only like half a series that desperately needs a sequel. The animation is amazing, the music also, and the hermetic story does a fine job of subtly toying with sadistic and masochistic nature of Soubi, yet in the end almost nothing is resolved - a lot subplots are presented that are never explained, but if the series can't handle them then it shouldn't have even introduced them in the first place. In the end, "Loveless" isn't meaningless, but it also isn't flawless.