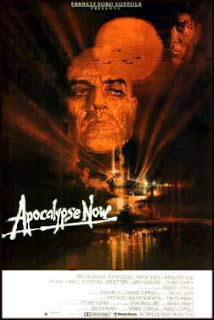 Vietnam, late '60s. Captain Willard, A drunk and washed up officer, gets an unusual assignment to find and kill Colonel Kurtz who has gone mad and set up his own army within the jungle. Willard, together with a crew of a few soldiers, sets up to find Kurtz in a boat. Their boat swims through a river and their first encounter is with Colonel Kilgore who enjoys the "smell of napalm in the morning", sets villages on fire and entertains his soldiers with women from the USA. The captain of the boat stops a few Vietnamese clerks in a boat and kills them, they encounter a tiger and get lost in the fog. In the end, only Willard, Lance and Chef reach Kurtz' outpost alive, beyond the Do Lung Bridge. He lets his soldiers arrest them. Willard spends a few days with Kurtz and finds out he is worshiped by the local inhabitants. Willard kills him and leaves the outpost.

Antiwar film "Apocalypse Now", winner of the Golden Palm in Cannes, 2 Oscars (sound, cinematography) and 3 Golden Globes (director, supporting actor Robert Duvall, music), is an overlong and pretentious achievement, but it's directed in an extremely ferocious and powerful way so that it somewhat justifies it's legendary reputation. The director Francis Ford Coppola is criticizing American military intervention in Vietnam in a raw and cynical way, without any compromise, mostly through a lot of surreal scenes (Colonel Kilgore bombards a village with helicopters in tune to Wagner's music, equipped with his classic quote: "I love the smell of Napalm in the morning..."; a helicopter on fire stuck on a tree, violet gas in the jungle...), but also offers a thought provoking theme about the relative moral, and his visual style is impressive, thus serving as a counterbalance to the radical right wing screenplay written by John Milius, who said it was an ironic jab at Hippies and their "Nirvana Now". The extended version, "Apocalypse Now - Redux", is even better than the original version. Also, Robert Duvall is brilliant as war criminal Kilgore (in one scene he doesn't even blink when a bomb explodes only a few feet away from him, while everyone other around him ducks from shock - that sly situation has been copied a lot of times in many other action films). Ironically, the last 30 minutes of the radically phantasmagorical story, in which Marlon Brando's crucial character Kurtz finally shows up, is also the worst part of the movie because of his unbearable monologues and philosophical babble, but it still became famous non the less.