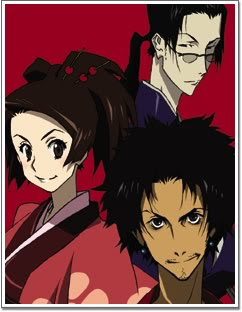 Japan, 19th century. Mugen, a master swordsman and a tramp in one, enters a restaurant where he notices a few arrogant samurais who are molesting customers. He offers Fuu, the waitress, to get rid of them for a few rice cakes and she accepts. He manages to win, but because of a misunderstanding gets into a fight with Jin, who is also a broke master swordsman. They both get arrested and convicted to a death sentence, but Fuu saves them and persuades them to help her find a mysterious samurai who smells like sunflowers. On their long way they travel through half of Japan and get into a lot of trouble. In the end, they discover that samurai is Fuu's father who abandoned her. He gets killed by a professional assassin who also attacks Fuu, but Jin saves her. Mugen gets into a major showdown with three killers and wins. In the end, the trio separates.

"Samurai Champloo" is one of those achievements for which we have to admit that they are excellent, although they are not. After his excellent anime "Cowboy Bebop", director Shinichiro Watanabe took a trip into the past, Japan of the 19th century, and created an interesting anime with refreshing modern references (i. e. a samurai is singing in hip hop style), flawless style and flawless animation, but a one that also disappoints with weak, episodic story and pale characters from which we would have loved to find out more than the small crumbs of character development that were served from the authors. In the end, only the amusingly introverted Jin with glasses seems like a real person. At the same time there's not a lack of genius scenes, like the one in which Fuu gets forced to become a prostitute so she ends up making grimaces to chase off customers from the brothel or the one with Americans who are cheating in a baseball game. And the final showdown is really great. But artificial characters remain artificial, and all of the 26 episodes only superficially portrayed them. "Samurai Champloo" is one of those achievements that we deeply admire, but at the same want to change in order to get rid of all those flaws and make it look better.