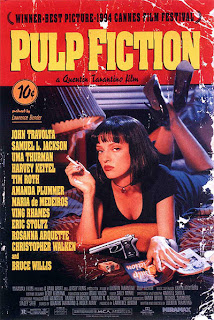 Los Angeles. Small time crooks Pumkin and Honey Bunny decide to rob the diner in which they are eating... Hitmen Jules and Vincent head to an apartment to retrieve a mysterious briefcase for their boss Marsellus Wallace, that was stolen from a gang of youngsters. There they kill the youngsters... Vincent gets an unusual assignment: he has to take his boss' wife, Mia, out on a date. Together they dance in a 50s themed restaurant and win a grand prize. When they return to Mia's home, she falls in a coma due to a heroin overdose. Luckily, he is able to bring her to a friend's house and save her... Butch, an aging boxer, agrees to lose a match for Wallace in exchange for a large sum of money. But during the match he changes his mind and wins, running away with the money. Just as Butch is about to run away with his girlfriend, he notices he forgot his father's watch in his apartment. Butch goes to get it, finding Vincent in the apartment and killing him. He hits Marsellus with the car on the street and hides in a store. But there two gay sadomasochists capture both of them. As they go on to rape Marsellus, Butch manages to free himself and kill them. Marsellus is grateful and agrees to forget the boxing match incident... Back in the apartment, another youngster shows up and shoots at Jules and Vincent, but his bullets mysteriously miss them before they shoot him. Jules is convinced that was a miracle and decides to leave his job as a criminal. They go to a diner where Pumpkin and Honey Bunny want to rob Jules, but Jules stops them and recommends them to change.

It seems as if "Pulp Fiction" the movie and "Pulp Fiction" the reputation are two entirely different notions. The reputation of this film is high, but there is also a lot of hate directed towards it in some circles, so much that one may think the movie is filled with nonstop senseless violence from start to finish. But the real movie proves that it is not, and that it is remembered in a distorted way. The movie itself is actually pretty calm, static, and at some moments even noble and moral. The violence is present though, in about 5 or 6 sequences, but it is there and not for everyone’s taste. Quentin Tarantino obviously steals a lot from Godard, most notably in unconventional style and in absurd postmodern dialogues: in one scene near the start of the film, Jules and Vincent are driving in a car and talking about how a Quarter Ponder with Cheese is called "Royale with Cheese" in Paris. This dialogue is senseless. It doesn't have a point or a meaning. But it looks so real. Because, when you think about it, people in real life really talk a lot of nonsense and not every sentence is interesting or has a punchline. As silly as that dialogue is, it shows these are just two average guys with a strange job – they are killers. Tarantino also borrows a lot of heavy crime stuff and noir atmosphere from Scorsese, Fueller, Peckinpah and a many other authors, yet he has a knack to make them look fresh. A lot of the little subplots that could have been cliches were changed by placing the characters in unbelievable, twisted situations. For instance, after he double crossed Marsellus, Butch goes back to get his father’s watch he forgot in his apartment, despite the big risk of getting caught. He enters his apartment and gets his watch, but just as he relaxes he spots a foreign gun and takes it. The minute he does, his enemy, Jules comes out of the toilet – and Butch simply shoots him and gets out. Now that’s a scene. There is no big Hollywood showdown, no big words, he just eliminates him and that’s it. Later on, Butch is in his car and stops at the red traffic light. And the person who just accidentally crosses the street and stops is no other than – Marsellus. So Butch simply starts the car and hits Marsellus with it. It seems as if every movie clichee is abandoned for something unusual. But Tarantino makes a false step in one sequence and falls hard – it’s the one where Marsellus and Butch are caught by two gay criminals who are about to rape them. This whole moment may be interpreted as an allegory foreshadowed by Christopher Walken’s character’s monologue about his torture back in the Vietnam War, but it’s just too sick, unnecessary and again proves that Tarantino's sadomasochism often gets in his way as a filmmaker.

The three intervened stories complete each other, creating a small puzzle that is assembled only after one watches all of them, whereas in the end there is a moral. In the last segment, there is a form of a "Divine intervention" when a criminal shoots at Jules and Vincent but his bullets somehow miss them. Vincent ignores this – and gets killed by Butch later on – but Jules is convinced it was a sign from God and decides to quit his job as criminal – and thus lives. Jules' words directed towards Pumpkin are fascinating and speak volumes; "There's a passage I got memorized. Ezekiel 25:17. The path of the righteous man is beset on all sides by the inequities of the selfish and the tyranny of evil men. Blessed is he who, in the name of charity and good will, shepherds the weak through the valley of the darkness. For he is truly his brother's keeper and the finder of lost children. And I will strike down upon thee with great vengeance and furious anger those who attempt to poison and destroy my brothers. And you will know I am the Lord when I lay my vengeance upon you. I been sayin' that shit for years. And if you ever heard it, it meant your ass. I never really questioned what it meant. I thought it was just a cold-blooded thing to say before you popped a cap in his ass. But I saw some shit this morning that made me think twice. Now I'm thinking: it could mean you're the evil man. And I'm the righteous man. And Mr. 9mm here, he's the shepherd protecting my righteous ass in the valley of darkness. Or it could be you're the righteous man and I'm the shepherd and it's the world that's evil and selfish." That's one of those dialogues that deserve to be framed, because it shows something that is not shown very often: a bad guy contemplating if his whole life was wrong. This is a very complicated, demanding, ambitious and unusual film, despite being cold and nearly emotionless because it contains a lot of wisdom and inspiration. "Pulp Fiction" is a triumph of independent and creative filmmaking in grand style, but it is still a little bit overrated – it may be a masterpiece, but it is still the worst masterpiece of the 90s.