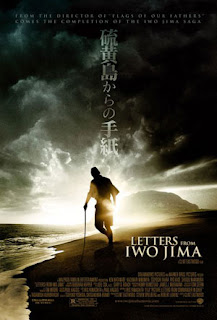 Iwo Jima today. Japanese explorers discover a box full of letters in an abandoned cave from World War II. Iwo Jima, 1940s. Saigo, a young soldier who has been drafted into army, misses his wife and his bakery where he worked. After complaining, his officer punishes him by hitting him, but he is saved by general Kuribayashi, a kind man who lived in USA and who wants every soldier to feel comfortable. After the soldiers completed tunnels and caves, US invasion of the island started. Loosing inevitably, the officers commit suicide one by one. Saigo refused to commit suicide and went on to fight with Kuribayashi in the northern part of the island. After a march, Kuribayashi gets pulled out near the beach from an officer, where he commits suicide. Saigo gets captured by the American army.

"Letters From Iwo Jima" is one of the most unusual war films of it's time. Credit has to be given to director Clint Eastwood, an American, who filmed a story about the World War II battle for Iwo Jima that was told from the Japanese perspective - one may even wonder how he gave directions to an almost all Japanese cast - in order to bring the point across. What is the point? The point is that two nations, enemies in war, are actually two sides of the same coin, stuck in an anger obsessed state where they should fight war for war's sake, although they could be friends and live in peace. The first half of the film is quiet, meditative and calm; in the opening shots Iwo Jima today is shown, full with abandoned tanks that have been covered with plants. Then the story switches to the daily routine of Japanese soldiers in 1940s; the officers are quietly complaining that the drinking water is making them sick, the caves where the soldiers should be stationed are full of insects.

When the US bombardment of the island starts, the movie transforms into a violent, gory, frightening and dark story. In one great little, unusual detail, a Japanese officer discovers that his beloved horse in his stable has been terminally injured after the US bombardment. As a whole, the movie is lyrical, poetic and touching, showing a lot of understanding for the opposite side, but in some specific aspects, it lacks deeper character development that undermines it's quality, and Eastwood seems to loose track of the rhythm in the overstretched ending; cutting the film by some 10-20 minutes could have resulted in an more compact achievement. Eastwood also steals a lot from better war films like "Saving Private Ryan", "The Thin Red Line" and "The Deer Hunter", but the story's originality comes from the analysis of the opposite side - "Ryan" wasn't told from German's perspective, neither was "Deer" from the Vietnamese - and that's why it's justified that it was made. Among the cast, Ken Watanabe gives and excellent role as the Japanese general Kuribayashi, influenced by the American way of life, wondering if he could have lived in peace with the "enemy" if by some different circumstances his homeland hasn't declared war on it.